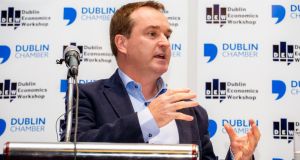 Robert Watt: ‘The cost-benefit analysis of significant investment in rail, and I’ll get shot for saying this, is challenging.’ Photograph: Jenny Barker

One of the State’s most senior civil servants has promised a “new approach” to spending on major capital projects in the wake of the children’s hospital and broadband controversies.

Robert Watt, the secretary general of the Department of Public Expenditure, acknowledged the State had a problem delivering “bespoke” or once-off projects that cost more than €1 billion.

Mr Watt was addressing the Dublin Economics Workshop in Wexford.

However, he said changes to the public spending code, to be published in the coming weeks, would provide greater transparency around costs while allowing governments to walk away from projects if costs spiral.

The code is the official set of rules and procedures that public bodies must follow when they commission projects.

Under the revised code, Mr Watt said big projects – those over €100 million – would be reviewed by an international panel to guard against the type of budget overruns witnessed in the national children’s hospital project.

However, he appeared to defend the project, which is now expected to cost €1.7 billion – more than double the original estimate – saying it was three times bigger in scale than the last hospital the State built, which was Tallaght Hospital.

He also noted the State had to spend €250 million on ground works before building could start. “This is a massive project with great complexity,” he said.

Mr Watt was one of several senior civil servants to advise Cabinet against approving the €2.9 billion National Broadband Plan, which is also expected to cost a multiple of the original estimate.

In his speech to the conference, Mr Watt also said the Government should prioritise spending on urban transport systems over the regional road or rail networks. He said “the biggest transport challenges” facing the State were in cities.

“The cost-benefit analysis of significant investment in rail – and I’ll get shot for saying this – is challenging,” he said. “Much better to invest in urban transport where there is congestion around the major cities.”

One of Ireland’s biggest structural failings, he said, relates to land use and the need to build up cities “in a much more compact, densified way.”

“Just walk around any of our five cities and there’s lots of derelict land within the core,” he said.

On Brexit, Mr Watt warned that the reaction on financial markets to a no-deal Brexit could be worse than anticipated. While sterling had fallen in reaction to the current uncertainty, bond yields and equities seemed unperturbed by the potential damage to the European economy, he said.

Mr Watt said he believed the Government could stay within the EU’s strict fiscal rules while coping with the fallout from a hard Brexit.

However, he questioned whether the EU’s rules were appropriate for small countries at this stage of the economic cycle and called for an open debate in Europe on their efficacy.

The rules, which were ratified by referendum here in 2012, impose strict ceilings on government spending.

1 Comcast acquires Irish cloud-based telco Blueface
2 US threatens retaliation against EU over proposed carbon tax
3 Money matters: ‘My father embarrassed us with his haggling’
4 Abtran challenges award of €63m contract by Irish Water to rival company
5 High costs and low returns will fuel nursing home shortage - CBRE
6 Are there annual limits on inheritances or gifts to a child?
7 Higher costs result in steep decline in profits at Parc Aviation
8 Greencore to provide update on business after US exit
9 Volvo warns of scaled back car line-up if UK splits from EU rules
10 Who are Ireland’s 17 billionaires?
Real news has value SUBSCRIBE