China suspends import tariffs on some US goods 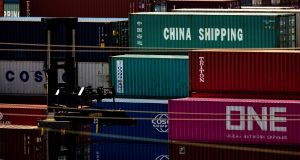 China’s government on Wednesday moved to exempt 16 types of US exported goods from import tariffs ahead of the latest round of trade talks in a gesture that will do little to resolve the ongoing trade war between the world’s two largest economies.

Starting September 17th, China will for one year suspend the tariffs, which it said were countermeasures against US tariffs following Washington’s “Section 301” investigation, the State Council announced.

Included on the list were some cancer drugs, lubricant oils and a handful of chemicals which China either does not produce itself or cannot easily replace by buying from other countries.

No big-ticket US exports such as pork or soybeans were included, with China instead turning to countries such as Argentina, Brazil and Russia for commodities they previously sourced from US farm states that voted for Donald Trump in the 2016 presidential election.

The State Council’s tax regulator will next look to further expand exemptions on US goods and release follow-up lists when they are ready, it said. In total, there are more than 6,000 US goods that could qualify for tariff exemptions.

China and the US last week agreed to restart face-to-face talks later this month in a bid to ease tensions in their bitter trade row.

Lower-level Chinese and US officials are expected to resume negotiations later this week or next, ahead of a trip to Washington by China’s lead negotiator, Liu He, in October.

Ever since negotiations broke down in early May, when Mr Trump accused Beijing of “reneging” on what US officials described as an almost completed draft agreement, there has been little progress. A June meeting between Mr Trump and his Chinese counterpart, Xi Jinping, on the sidelines of the G20 summit in Osaka, Japan also failed to break the impasse.

People briefed on the negotiations say it would take a confidence-building “mini-agreement”, in which the US eased restrictions on technology sales to Chinese telecoms equipment maker Huawei in return for Chinese purchases of American agricultural commodities, to restore momentum to the negotiations.

After the May breakdown, Mr Trump moved to limit sales of US-made components to Shenzhen-based Huawei and remains frustrated that China has largely refrained from any meaningful purchases of US agricultural commodities.

“The Chinese are waiting to see what the US does on Huawei,” said one person briefed on the talks.

The next round of US tariff increases is scheduled to take effect on October 1st – the same day that the Chinese Communist party will celebrate the 70th anniversary of the founding of the People’s Republic of China in 1949.

Negotiations have been further hampered by the ongoing protest movement in Hong Kong, which Chinese officials say the US has encouraged, that started over a controversial extradition bill. US officials have rejected the accusation as groundless. – Copyright The Financial Times Limited 2019