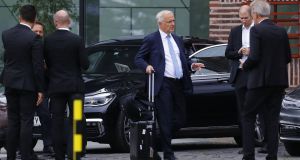 Olli Rehn, governing council member of the European Central Bank and governor of the Bank of Finland, departs a council meeting ahead of the ECB rates decision in Frankfurt. Photograph: Alex Kraus/Bloomberg

Finland, current holder of the EU presidency, will press finance ministers across the union to put climate change at the heart of their budget plans as they convene for an informal meeting in Helsinki on Friday and Saturday.

The official said he expected discussion at the gathering on carbon pricing, energy and aviation taxation and how climate change can be addressed in national budgets. Climate change emerged as a priority issue across the European electorate in parliamentary elections in May, with a Eurobarometer survey published this week finding that 93 per cent of EU residents recognised the issue as serious.

The United Nations Intergovernmental Panel on Climate Change warned last October that the world had only about a dozen years to keep global temperatures to a maximum of 1.5 degrees above pre-industrial levels.

Finnish organisers will also seek to use the meeting to “reboot” Capital Markets Union, a project that began in 2015 in order to reduce the reliance by businesses across Europe on bank financing and more on capital markets funding, to reflect the case in the US.

Capital Markets Union remains incomplete and still falls short of initial goals, according to a document circulated ahead of the meeting of finance ministers. It calls for an alignment of national laws on corporate insolvency and taxation to help lift barriers to capital flows across the EU.

Despite efforts to decrease reliance on banks and diversify funding sources, bank assets in the 19-nation euro zone still account for 300 per cent of total economic output, compared with 85 per cent in the US, according to the International Monetary Fund.

Finance ministers will also discuss EU fiscal rules, according to the Finnish official, who said there had been “quite vocal dissatisfaction” across the union about how enforcement of the rules had been too lax, and that they are far too complex and “pro-cyclical”, in that they impose overly restrictive limits when countries at struggling economically.

On Wednesday the European Fiscal Board proposed a radical simplification of budget rules to help make public finances more sustainable while stabilising economies throughout the business cycle. The proposal, which was requested by the European Commission, will feed into the commission’s review of the rules later this year.