Brexit may have stopped Irish economy from overheating – economist 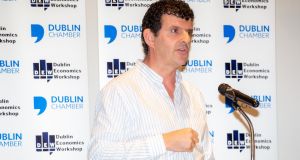 Prof Kieran McQuinn of the ESRI said modelling the impact of a no-deal Brexit was extremely difficult. Photograph: Jenny Barker

Brexit may have inadvertently stopped the Irish economy from overheating, a leading economist has claimed.

“In a strange way it has helped cool the economy by having a contractionary impact on things like investment and consumption,” Kieran McQuinn, research professor with the Economic and Social Research Institute (ESRI), told an audience at the Dublin Economics Workshop in Wexford.

The Brexit-related weakness in sterling has also helped suppress inflation, he said. “So you could argue, in a way, that it’s been positive,” Prof McQuinn said.

However, he cautioned that the effects to date have been about the expectation of Brexit. “If it actually happens and particularly in the context of a no-deal, it could have a seriously negative impact,” potentially seeing the Irish economy contract next year, he said.

The ESRI is currently predicting growth here to fall to 1.2 per cent next year if the UK crashes out without a deal.

But Prof McQuinn said modelling the impact of a no-deal Brexit was extremely difficult as many of the short-term effects such as delays at ports were impossible to quantify and could be worse than expected.

The Department of Finance’s chief economist John McCarthy said recently that the Irish economy was now operating close to full capacity with signs of overheating beginning to emerge but that this could rapidly transform into “underheating” as a result of a cyclical downturn caused by Brexit.

She said that while the Irish economy greatly benefits from being one of the most open in the world for trade and finance, this comes with vulnerabilities beyond our control.

“Ireland offers an example of a small economy that benefited greatly from openness. However, economic openness exposes the country to many vulnerabilities beyond our control,”she said.

“These vulnerabilities can be cyclical, such as a global growth slowdown with knock-on effects for Irish exports, or structural in the form of substantial changes to the status quo such as Brexit, trade wars or the evolving global taxation landscape,” Ms Donnery said.

Referring to Central Bank research, she noted that compared with the UK, US and euro zone, the Republic is the most affected by, or the most elastic to, a negative global shock. Comparing with other small open economies, the research suggests “Ireland would be less negatively affected than Singapore or Sweden, but more affected than Switzerland and New Zealand, for example”.

Ms Donnery said more than 100 companies, mainly in the financial services sector, had applied to the Central Bank to set up or extend operations in the Republic because of Brexit.

However, she cautioned that this positive stream of inward investment did not outweigh the potential damage to the State from a hard Brexit.

Barclays and Bank of America have been among the high-profile banking entities to set up EU headquarters in Dublin in the wake of the UK’s Brexit referendum.