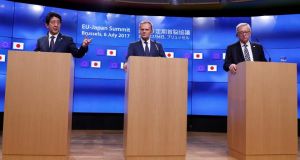 The signing of a landmark new trade deal between the European Union and Japan has been welcomed in Ireland with the Government and business groups saying it presents new opportunities for Irish companies looking to do business in what is one of the world’s largest economies.

The deal, when approved, will remove tariffs for 99 per cent of the goods traded between the EU and Japan.

Tánaiste and Minister for Enterprise and Innovation Frances Fitzgerald said the agreement sent a powerful signal that international co-operation, rather than protectionism, was the way to tackle global challenges.

Japan is Ireland’s biggest trade partner in Asia after China and the largest source of foreign direct investment (FDI) into Ireland from Asia.

Ireland’s exports to Japan in 2015 were worth €5.7 billion, while it imported €4.2 billion worth of goods and services.

Ms Fitzgerald is to lead a trade mission to Japan later this year, which she said should further develop links between the two countries.

Minister for Trade Pat Breen said the deal would enable Irish companies across a wide range of sectors better access to Japan’s marketplace.

“Agrifood, which is Ireland’s largest indigenous industry, will see particular benefits from the agreement, with new access for dairy products in particular,” he said.

“The progress achieved will also ensure tariff elimination on medical devices and pharmaceutical products, which is very good news for Irish industry,” he added.

Fianna Fáil described the trade agreement as an additional defence against the harmful effects of Brexit on Irish trade and business.

The party’s enterprise spokesman, Niall Collins, said the really important part of the deal is the particular focus on agriculture and agribusiness.

“The Irish beef industry will benefit from this agreement, and following some very hard years for beef farmers they will welcome access to new, wealthy markets,” he said.

“The Japan free-trade deal may be a major opportunity for the Irish food and agri sector, given the possible implications of Brexit to this sector.”

“Total trade between Ireland and Japan, including services, exceeded €7 billion in 2015. Enterprise Ireland’s strategic focus is to help clients grow exports to Japan in the medtech, aviation, fintech and agritech sectors and the tariff elimination on medical devices and pharmaceutical products in particular is good news for Irish exporters,” said Mr Adams.

Yasuyuki Ozeki, a representative for Japan External Trade Organisation, which is the Japanese counterpart to Enterprise Ireland, also welcomed the deal.

Mr Ozeki said the agreement was good news for both Irish and Japanese companies looking to export.

The Irish Exporters Association said given the possible implications of Brexit, the opportunity to widen the country’s export base and protect against an over-reliance on a single market, was a positive outcome.

Chambers Ireland called on the Government to adequately resource support for businesses in accessing new markets and availing of the benefits of new EU trade agreements, such as those with Japan and Canada.

1 Fianna Fáil may have just pressed the pause button on the property market
2 Who are Ireland’s 17 billionaires?
3 Saudi prince’s WhatsApp account ‘directly involved’ in Bezos hack
4 Are there annual limits on inheritances or gifts to a child?
5 My father in a nursing home wants to gift me his house
6 Dublin office vacancy rate hits lowest level in 20 years
7 European investor acquires Harcourt Road offices for €55m
8 Corporate tax change is inevitable, says Donohoe
9 Pensions in the spotlight, climate clash at Davos and confusion at O’Flynn empire
10 State subsidises public sector retirees to cover gap until State pension
Real news has value SUBSCRIBE