Sector has yet to fall below 50 mark, which separates growth from contraction 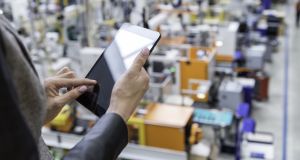 The Investec Services purchasing managers’ index slipped to 57.6 in June from 59.5 in May. Photograph: iStock

Growth in Ireland’s services sector slipped to a seven-month low in June as new domestic business orders expanded at a slower pace, but the sector continued to expand, a survey showed on Wednesday.

The Investec Services Purchasing Managers’ Index (PMI) slipped to 57.6 in June from 59.5 in May, for its lowest reading since November last year. However, it has not fallen below the 50 mark that separates growth from contraction since June 2012, when Ireland was halfway through a three-year bailout.

Ireland was the best-performing economy in the European Union for the third year in a row last year, despite concern that it is the country most exposed to the fallout from neighbouring Britain’s vote last year to leave the EU.

The manufacturing PMI for June, released on Monday, reached 56.0, indicating Irish manufacturing was growing at its fastest since July 2015.

Taken together, the two surveys show “very solid overall expansion” in the Irish private sector in the first half of the year”, Investec Ireland chief economist Philip O’Sullivan said.

The forward-looking business expectations subindex for services indicated that eight times as many respondents expected improvement in the coming 12 months as expected deterioration.

“Given the generally improving international backdrop, we think that this optimism is warranted,” O’Sullivan said.