Recession-busting Australia heading for the buffers 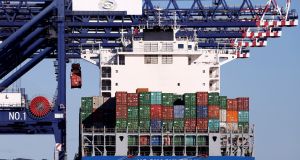 A crane unloads containers from a ship at the Port Botany Container terminal in Sydney. Photograph: Reuters

Australia has now gone 103 consecutive quarters without a recession, beating the record of 102 quarters of growth set by the Netherlands in the 26 years up to the global financial crisis. But there are clouds on the horizon and the lucky country’s good fortune might be about to run out.

When Donald Horne wrote in 1964 that Australia was a “lucky country”, he meant it as an insult, though it soon came to be used as a feel-good catchall. Horne’s point was Australia succeeded, thanks mainly to abundant resources, despite being poorly governed.

In the late 1970s, Singapore’s prime minister Lee Kuan Yew said Australia was about to become the “poor white trash of Asia”. When the Labor party won power in 1983, the treasurer, and later prime minister, Paul Keating agreed, warning of Australia becoming a “banana republic”.

The economic reforms begun by Keating and prime minister Bob Hawke in the 1980s created the basis for an economy that has been growing since 1991. Those reforms included floating the currency, decentralised wage fixing, independence for the Reserve Bank (Australia’s central bank) and dismantling high import tariffs.

Those reforms were continued by the conservative Liberal-National coalition when Labor lost power in 1996, and by Labor again when it returned to government in 2007 and saw Australia through the Great Financial Crisis without a recession. Prime minister Kevin Rudd and treasurer Wayne Swan immediately announced a $10.4 billion (€6.88 billion) stimulus package when the financial crash took hold, followed by another $42 billion when it became obvious how deep the crisis was.

They saved the country. Australia was the only developed nation not to go into recession during the global financial crisis but the ignoble response from opposition leaders Malcolm Turnbull and Tony Abbott (who soon replaced him) to the stimulus and borrowing required sowed the seeds for the difficult times the country now faces.

Abbott, with the backing of much of the Murdoch press, was able to paint Labor as spendthrifts splashing money about unnecessarily. Labor barely clung onto power as a minority government after the 2010 election and lost in a landslide in 2013.

Abbott, who was dumped by his own party in an internal coup in 2015, had helped destroy the public’s faith in economic reform.

His successor, Turnbull, saw his government reduced to a one-seat majority in last year’s election, a result that has made him wary of even attempting much economic reform.

Labor, having seen how well Abbott initially did by just saying no to everything, is now copying him and refusing to back the recent budget, much of which was previously Labor policy – such as making school funding fairer to poorer families.

The bipartisan support for economic reform has degenerated to hurler on the ditch sniping which has seen a carbon price come and go, housing become unaffordable to people on average incomes (Sydney’s median house price is now 1.15 million Australian dollars or €770,000) and sensible proposals from one side of politics portrayed as the devil’s work by the other side.

The mining boom which drove much of the prosperity in the last 15 years is slowing as China and India need less of what Australia digs out of the ground, and the dining boom – selling food and drink to Asia’s growing middle class – is not going to replace it any time soon.

Eventually, there has to be a recession. But with unemployment still low at 5.5 per cent, Australia, despite its poor governance, is still the lucky country.