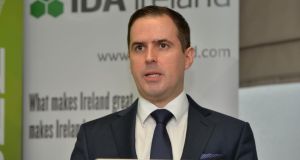 IDA Ireland remains confident of winning jobs from the UK as financial services companies make their exit from the City of London.

The pipeline of foreign direct investment into Ireland in the second half of this year is “reasonably strong”, according to IDA Ireland chief executive Martin Shanahan.

Launching the investment agency’s outlook for the second half of this year, Mr Shanahan noted that client companies are pointing to taxation and housing as areas posing difficulties.

IDA Ireland said investments had approved in the first half of this year will lead to the creation of 11,000 jobs despite headwinds in the form of both Brexit and potential US tax changes, Mr Shanahan said that the outlook for the remainder of this year is good with sentiment among IDA client companies being “extremely strong”.

However, he also noted that talent is the number-one issue on clients’ minds. “Talent is and will continue to be the key differentiator in terms of winning global investment.”

Asked about the situation in relation to financial services companies leaving the UK, Mr Shanahan said Ireland was “much more attractive” than Luxembourg, while Tánaiste Francis Fitzgerald and Minister for Enterprise and Innovation acknowledged the necessity for Ireland to remain competitive in the wake of global challenges.

While the IDA has seen Brexit-related jobs coming mainly to urban areas, some firms are opting to set up secondary sites in regional locations, a key focus of both the IDA and the Department for Jobs, Enterprise and Innovation.

Although the inward investment agency said it had won 114 projects during the first six months of the year, that figure was the same level as the first half of 2016. Life sciences, content and business services, technology and international financial services all performed strongly in the first half of the year.

At the launch of the mid-year report, Ms Fitzgerald said: “IDA Ireland’s record results for 2016 and excellent provisional results for 2017 show that Ireland continues to be one of the strongest performers in Europe in the foreign direct investment [FDI] sector.

“With challenges ahead it is essential that we must remain focused on enhancing Ireland’s competitiveness to ensure further investments are won for Ireland, whether they are expansions from companies already present here or new businesses arriving here for the first time.”

Mr Shanahan added: “Geopolitical instability is the main threat that clients see affecting the performance of their business in Ireland over the next two to three years. The positive results are an indication of just how important Ireland’s stable economic and political environment have become for investors.

“Indications suggest that investors believe that the new US administration may have more of an impact than Brexit.”

1 Chris Johns: Ireland risks populist culture war between young and old
2 Inbreeding poses major threat to Ireland’s thoroughbred horse sector
3 Big spending election promises and Dublin hotel room taxes
4 Seán FitzPatrick’s new Greystones home plan runs into privacy issues
5 The Irish economy is thriving but if you’re not feeling it – here’s why
6 How much does it cost to sell your house?
7 Single, married or cohabiting: Who pays the least tax?
8 ‘Life in Vilnius reminds me of Ireland in the 1990s’
9 Should I sell the old family home to allow children buy apartments?
10 LinkedIn confirms plan for massive campus in Dublin city centre
Real news has value SUBSCRIBE