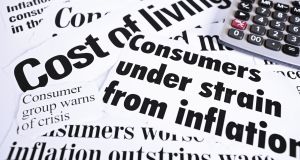 The Living Wage Technical Group has raised what it considers the minimum hourly pay rate a worker needs to cover basic cost of living expenses to €11.70.

Rising rents associated with the current housing crisis have been blamed for a hike in the living wage. The Living Wage Technical Group has raised what it considers the minimum hourly pay rate a worker needs to cover basic cost of living expenses to €11.70.

The new figure represents an increase of 20 cent per hour on the previous rate. The recommended living wage rate is now nearly a third higher than the legally required minimum wage, which is set at €9.25 an hour.

“The current housing crisis, and associated increases in rent levels, has been the main driver of the increased wage rate,” the group said.

It noted that rents in Dublin typically accounted for almost half (47 per cent) of a single person’s living costs and had increased by an average of €15 per week over the past year.

In other cities, average rents had gone up by over €12.50 over the same period, it said, while those in other parts of the country were up by €6 per week.

In its latest update, the group said the cost of food, clothing, health insurance and social inclusion had all reduced in 2017.

Additionally, the group said changes to the universal social charge (USC) in the last budget increased net pay for a people earning the living wage, when compared to 2016.

However, it said these savings were undone by rising rents, meaning the overall cost of a socially acceptable minimum standard of living increased by an average of 2 per cent for a single person, without dependents in 2017.

The Living Wage Technical Group for the Republic was established in 2014, and is updated in July of each year.

It is part of a growing international campaign to establish an evidence-based hourly income that a full-time worker needs to meet the cost of housing, utilities, transport, healthcare, clothing and food.

It differs from the legally required minimum wage which is set by law, and which campaigners claim often fails to meet basic standard-of-living requirements, leaving recipients reliant on welfare for additional income.

In 2015, Lidl become the first Irish supermarket chain to sign up to the Living Wage Campaign, pledging to pay staff a minimum of €11.50 an hour.