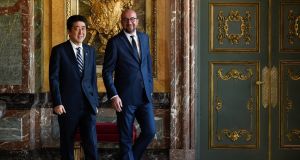 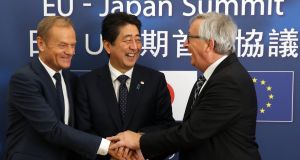 The EU has signed a long-awaited, landmark trade agreement with Japan phasing out current high tariffs on the dairy and beef sectors among others.

Japan’s prime minister Shinzo Abe was in Brussels on Thursday on his way to the G20 summit in Hamburg to sign off on the deal after four years of negotiations.

The deal, a rebuff to growing global protectionism and specifically US president Donald Trump, will slash tariffs and embrace markets representing close to one-third of world economic output.

The message from both sides was the same and clearly directed at the same target.

“We are hoisting the flag of free trade high amidst protectionist trends,” Mr Abe asserted at the joint press conference.

“There is no protection in protectionism,” EU Commission president Jean Claude Juncker said, insisting that the only way forward consisted in working together for a rules-based international trading system.

And the EU Council president warned that the “world does not need to go back 100 years in time”. To those Brexiters who said that it is easier to do global trade outside the EU, “today we show this is not true”, he said.

The “economic partnership agreement” will see tariffs tumbling over a wide range of products and a new level of business access to the EU’s sixth largest trading partner.

EU officials say that when transitional periods for some sensitive products expire the agreement will cover 99 per cent of bilateral trade.

Japan, is the fourth richest economy in the world by GDP, with a population of 127 million, and the EU’s second biggest trading partner in Asia after China. The EU exports over €80 billion of goods and services to it every year and more than 600,000 jobs in the EU are tied to exports to Japan. Japanese companies in the EU employ more than half a million people.

The deal should remove almost all custom duties which cost EU exporters €1 billion a year, and EU officials claim it has the potential to see EU exports to Japan of processed food rising by up to 180 per cent and chemicals by over 20 per cent.

The dairy sector will be particularly affected – the deal would greatly reduce Japanese tariffs on imports of European cheese over 15 years .

Japan agreed to fully drop its tariffs on hard cheese, such as Gouda and cheddar, over 15 years. On soft cheese – such as Camembert, Brie, feta and mozzarella – there will be a tariff-rate quota of 20,000 tons, which will grow to 100,000 tons within 15 years. Inside this quota, Japan’s high tariffs will gradually drop to zero.

Japan will reduce its 38 per cent tariff on beef imports from the EU down to 9 per cent over 15 years. Those tariff cuts are tied to a 42,000-ton quota in the first year, which will grow in the following years. On pork, the tariffs will fall even more.

There will be full market access for wine and spirit drinks – the wine access alone will save exporters about €134 million a year.

In an important concession to Europe’s farmers, the agreement will also protect 205 European geographical indications for iconic food names of gourmet products such as Roquefort cheese, Parma Ham and Irish whiskey . It also allows European producers to earn a premium for the quality of their produce.

It will allow the EU to set higher standards for product or food safety, and higher levels of protection for labour or the environment, officials insist . The deal explicitly protects the EU’s “right to regulate” in these and other areas.

The deal will lead to a complete harmonisation of automotive standards and an opening up of the car market tariff free within seven years. The EU retains the right to reimpose car tariffs if Japan does not eliminate non-tariff barriers in the sector. On some car components, duties will be reduced well before seven years.

Tokyo will open up its public procurement market, including in big- and medium-sized cities,

The negotiations which have been ongoing for four years have been accelerated in recent months in response to Donald Trump’s retreat from world trade and repudiation of the Trans Pacific Partnership deal with Asian nations and Australia.

Senior EU officials say the deal is an important response to protectionism in line with the EU’s other recent trade agreements with South Korea Canada, and Vietnam. Five years ago, the trade agreement between the EU and South Korea was put in place, they say, and since then EU exports to South Korea have increased by 55 per cent. European companies have saved €2.8 billion in scrapped or discounted customs duties.

The deal, which has yet to be finalised in detail does not yet include investor courts.

Investor-state dispute settlement (ISDS), or its equivalent, investment court system (ICS), are a system through which individual companies can sue countries for alleged discriminatory practices and has proved very controversial in some previous EU trade deals with trade unions who see the mechanisms as a threat to public service provision.

In the TTIP negotiations with the US, now on hold, the EU substantially revised its position and the Japan deal includes clauses which will allow member states to protect key services from privatisation or allow local sourcing of sensitive goods and services.

EU officials remain confident that agreement on investor courts will be achieved.

The leaders agreed to reinforce the dialogue between the EU and Japan on a range of issues from North Korea – with a strong call for new measures against it - to climate change and terrorism.

1 Explainer: what is the row about SF’s multinational tax plan?
2 Britain after Brexit will not be alone, but it will be lonelier
3 Getting out from under ‘never-ending’ Celtic Tiger debt burden
4 Personal insolvency practitioner to pay €6,000 after providing misleading details
5 Election 2020: Parties' pledges on housing simply don’t add up
6 Pensions: Estonia plans to unleash a potential €4.85bn on economy
7 Banks withdrawing from ATMs – another failure of regulation
8 BBC announces 450 jobs will go in newsroom shake-up
9 EU eyes phasing out smallest euro cent coins
10 Fair Deal nursing homecare leaves little for bills and gifts
Real news has value SUBSCRIBE