Live register at 9-year low, drops by almost 2% in June

The number of people under 25 unemployed long term is 11,000 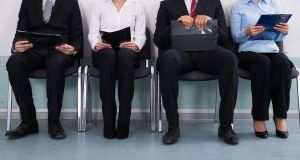 The number of people signing on the live register in June was 259,200, a drop of 1.8 per cent on May and the lowest number recorded since October 2008.

In unadjusted terms some 56,337 casual and part-time workers were on the live register in June, a 0.8 per cent increase on the previous year. Last month also saw 29,852 new registrants.

The Live Register is not a measure of unemployment, as people with part-time work can be entitled to benefits.

The seasonally adjusted series shows that 800 fewer people aged under 25 signed on between May and June but the unadjusted figure shows an increase of just below 1,500. Additionally, some 11,000 young people are long-term unemployed.

Calling for additional investment to reduce the number of young people who are unemployed long term, the director of the National Youth Council of Ireland, James Doorley, said: “While we are disappointed at the increase in young people signing on, this can – in part – be explained by seasonal trends.

“We are calling on Government to commit to reducing the number of young people under 26 who are long-term unemployed to under 5,000 by the end of 2018.

“It is vital we support young jobseekers into education, training and work experience and prevent the drift into long-term joblessness.”