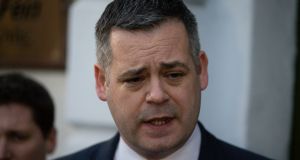 Pearse Doherty accepted that the State needs “to deal with” the national debt and praised the National Treasury Management Agency for having done an “excellent job”. Photograph: Tom Honan

Any windfall gains for the exchequer should be used to stimulate the economy rather than to repay borrowings, as proposed in this week’s draft programme for government, Sinn Féin’s finance spokesman Pearse Doherty has said.

Speaking to Inside Business, an Irish Times podcast, Mr Doherty said: “What we need to do is stimulate the economy at an appropriate level ... and to continue that over the next number of years. We need to use the resources that available from the transfers from Nama.”

The National Asset Management Agency is due to transfer the first €2 billion of an expected €4 billion surplus to the exchequer later this year. Mr Doherty said this money should be “used to build the houses that we need” to tackle the housing crisis.

The draft programme for government agreed by Fine Gael, Fianna Fáil and the Green Party earlier this week states: “We will use any windfall gains such as the National Asset Management Agency surplus, the final resolution of the liquidation of the Irish Bank Resolution Corporation or the sale of the state’s shareholdings in the banks, to reduce our borrowing requirements.”

Mr Doherty accepted that the State needs “to deal with” the national debt and praised the National Treasury Management Agency for having done an “excellent job” in refinancing our borrowings in the past couple of years.

The Republic’s national debt stood at €206.7 million at the end of 2019 with the NTMA tapping capital markets for another €18.5 billion so far this year, in large part to fund the massive cost of the Covid-19 impact on the economy.

Mr Doherty also said the State’s majority ownership of AIB could be “very, very useful at this point in time if used and directed properly”.

“Why don’t we use AIB to get out to SMEs to make sure that we get liquidity [to businesses] along with the state [credit] guarantee?”