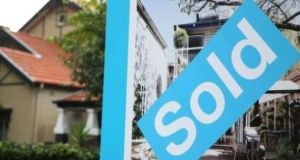 Home sales fell sharply in April as restrictions to curb the spread of coronavirus dampened activity in the State’s property market.

According to the Central Statistics Office (CSO) there were 2,351 “household dwelling purchases” filed with Revenue in April. This was 29 per cent below the level recorded in April last year and nearly a third down on the previous month’s figure.

The total value of transactions filed in April was €659 million, according to the residential property price index, down from a €1 billion in March.

Goodbody analyst Dermot O’Leary suggested the fall-off in transactions was more moderate than many had expected, given the drop-off in economic activity generally.

“With the backdrop of the economy and housing market effectively being put on freeze and the unemployment rate soaring above 20 per cent, the fall in transactions is more muted than we expected, especially in the new homes market,” he said.

But John McCartney of property agents Savills warned the latest figures primarily reflected activity before the coronavirus-related shutdown of the economy. He said it would be several months before the impact of the Covid-19 pandemic was fully reflected in the figures.

“Its hard to be exact as every transaction takes its own course through legals between going sale agreed and closing, which is the point at which the transaction gets registered on the stamping file,” he said. “ But in general it’s three to four months. So the April figures will reflect prices struck in December / January,” Mr McCartney said.

“On that basis we shouldn’t expect to see the Covid impact really coming through until the July or August figures are published,” he said.

This point was echoed by KBC Bank Ireland economist Austin Hughes, who said: “It may be some time before the scale or precise nature of the impact of the pandemic on the Irish homebuying market becomes clear.”

“The major effect is likely to be felt through the marked weakening in ‘macro’ conditions in the Irish economy, particularly in relation to weakness in employment and incomes,” he said.

The CSO’s latest Property Price Register indicated property prices nationally grew at an annual rate of 0.5 per cent in April, with prices in Dublin, where supply pressures have been most acute, falling by 0.1 per cent year on year.

The fall-off in economic activity and the rise in unemployment is expected to exert downward pressure on prices over the rest of this year.

Bank of Ireland chief executive Francesca McDonagh said recently that a fall in Irish property prices of between 5 and 12 per cent this year “seems a reasonable” assumption.

The latest figures indicate the typical cost or median price paid for a home in the Republic over the past 12 months was €260,000 while the median price of a home in Dublin was €370,000. This was unchanged from the previous month.

“What we don’t know yet is the full impact of the pandemic but unfortunately it is likely to hit those in lower income sectors most severely, and it is they who are already experiencing difficulties with affordability,” Rachel McGovern, director of Financial Services at umbrella group Brokers Ireland, said.

She said the pandemic is likely to exacerbate an already difficult situation for the lower income cohorts.