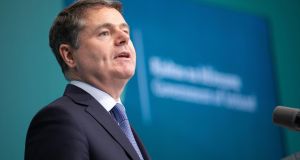 The Republic faces “serious” financial implications if the retirement age does not rise, according to wide-ranging briefing documents prepared for the Minister for Finance, Paschal Donohoe, by officials. Photograph: Julien Behal/PA Wire

The Republic faces “serious” financial implications if the retirement age does not rise, according to wide-ranging briefing documents prepared for the Minister for Finance by officials.

They also highlight problems with recovering bank bailout money, and the “scarring” effect Covid-19 on the economy.

“At present there are five people of working age for each retiree; this figure will fall to two people of working age for each retiree by 2050. This will have serious implications for the public finances, with increased outlays on healthcare, pensions and long-term care,” Department of Finance officials warn in a 166-page document prepared for Paschal Donohoe on his return to office under the new Government.

“By 2050, age-related expenditure will increase by around 6.5 per cent of [the domestic economy] per annum – the equivalent of €13 billion each year in today’s terms – illustrating the importance of structural reforms to ensure fiscal sustainability.

“ The most important reform is better alignment of retirement age with life expectancy.”

The stark warning comes as the Government has deferred legislation – which would increases the pension age in the coming years from 66 – pending a new commission reporting back on the matter in June of next year.

The briefing notes also highlight that taxpayers, who committed €29 billion to the State’s three surviving banks during the financial crisis, are unlikely to see all that money repaid “at least within a five-year period” as the banks’ already-depressed share prices were hit by the coronavirus shock.

AIB, the most costly rescue, has repaid less than half of its €21 billion bill and, as of May, its low share price means the State’s remaining stake was under water to the tune of €8 billion.

Officials also said that, aside from the possibility of 75 per cent State-owned Permament TSB being the subject of a merger deal – referred to in the document as a “corporate transaction” – it is unlikely that the State holding in that lender will decline “in the medium term”.

The Minister was also told that the tens of thousands of payment breaks offered to households and businesses hit by the Covid-19 crisis were “comparatively straight forward” compared to what comes next.

“Based on experience over the past decade, returning borrowers to paying their loans following income shocks is very difficult. But learning from the past, a condition of these payment breaks is a high degree of communication between the lender and borrower,” the document said.

Officials also note that the “trend rate” of economic growth may be lower over the medium term, as a result of “scarring effects” from the pandemic.

“Absent a vaccine, the new economic ‘norm’ will be very different, with behavioural changes (firms, households) likely at work,” they said. “The trend growth rate of the economy will likely be lower and the unemployment rate at which the economy ‘clears’ could be permanently higher than heretofore, ie, ‘scarring effects’ are certain: the crisis is not just a short-run phenomenon.”

Households will continue to set aside higher levels of savings and companies will invest less as uncertainty persists, they said.

Covid-19 has led to the cancellation of the latest annual summer-time National Economic Dialogue on the upcoming budget, the officials note. It has also resulted in the EU and the European Central Bank postponing from May to September their latest surveillance review of the economy following the State’s emergence from an international bailout in 2013.

The document reiterates department estimates that the introduction of an international digital tax regime could knock up to €2 billion off the Government’s tax base and that corporate tax reforms “are an exposure for the public finances”. A department analysis, published last October, said that a major “shock” to Ireland’s corporation tax base could result in as much as a €6 billion budgetary hole.

1 In this strangest of recessions, what happens next for Ireland?
2 Michael O’Leary is the boss you want to lead an airline out of crisis
3 Best Covid-19 ‘influencers’ will avoid hectoring
4 Ireland’s Covid-19 economy in five graphs
5 Overhaul of lease arbitration regime would be a game changer for retailers
6 Should I switch bank now with Ulster Bank at risk of closing?
7 The wealth of the Irish – how do your assets match up?
8 Minister seeks AG’s advice on banker accountability laws
9 Covid-19: Retailers warn of potential Christmas stock shortages
10 Apple’s Irish company structure key to EU tax finding
Real news has value SUBSCRIBE