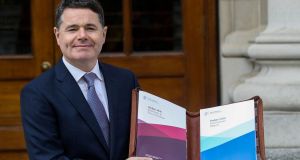 Minister for Finance Paschal Donohoe with Budget 2020: The Irish Fiscal Advisory Council report says there are serious long-term fiscal challenges ahead that should form part of today’s budgetary decisions.

Economic growth will slow to a long-term rate of about 1 per cent in the coming decades, with the impacts of an ageing population and reforms to corporation tax set to exert significant pressure on State coffers, the State’s budgetary watchdog has warned.

The Irish Fiscal Advisory Council (Ifac) on Wednesday publishes its first ever “long-term sustainability report”, which assesses the sustainability of the public finances for the period 2025-2050. The projections reflect population ageing and future economic growth.

The report admits the Covid-19 pandemic will have a “major impact” on the economy and public finances over the coming five years, but argues there are other serious long-term fiscal challenges ahead that should form part of today’s budgetary decisions.

“As a small, highly open economy in the Euro Area and the European Union [EU], Ireland has achieved remarkable income growth averaging 3.1 per cent per year, over recent decades, in real terms,” it says.

“Yet, the pace of growth has slowed since 2000. This report projects that growth will slow further over the coming decades before converging to a long-run growth rate of around 1 per cent. This is largely driven by a slowdown in labour-productivity growth.”

With Government spending set to outstrip revenues from 2025 as pensions and health costs increase, the debt-to-gross national income (GNI) ratio would fall to only about 90 per cent by 2040 and then rise substantially, reaching about 110 per cent of GNI by 2050.

GNI is an economic indicator calculated by stripping out the impact of multinationals from gross national product, and is generally considered a more accurate estimate of economic growth in an economy such as Ireland’s.

The report calls on the Government to “act sooner” to manage these challenges or face greater pain down the road.

To keep debt from rising back above 90 per cent of GNI, it argues that governments would have to reduce spending or raise additional revenues by 0.8 per cent of GNI if early action is taken, but by 2.1 per cent if delayed to after 2035.

Elsewhere, while the Department of Finance expects the OECD’s planned reforms to the corporate tax regime to cost the State in the region of €2 billion a year in receipts, Ifac warns the pain may not end there.

“Other changes in the international tax environment could further impact on Irish corporation tax receipts,” it says. “Based on the council’s 2019 estimates of excess receipts, a further cumulative fall in annual receipts of €3.5 billion would put further pressure on the public finances.”

On healthcare, the report warns that the implementation of Sláintecare could add substantially to spending.

“While it could lead to cost-savings and reduce health costs to households, full implementation would be expected to add a further 1.1 percentage points of GNI to government spending in 2030, rising to 1.2 percentage points by 2050 against the background of rising costs in healthcare,” it says.

Furthermore, the issue of climate change “poses significant risks to fiscal sustainability” and could “significantly impact on economic activity and long-run growth prospects”.

“Delaying action on climate change mitigation may mean that more drastic and costly measures may be required,” the report says. “This could come at the same time as Ireland is facing significant challenges from ageing pressures.”

On ageing pressures, Ifac says changing demographics will add to spending every year over 2026–2050, which will have “substantial impacts” on the government debt burden over the long run.

“Unlike the impacts associated with Covid-19, these are likely to be long-lasting changes,” it adds.

However, the report notes that Ireland’s low cost of borrowing, alongside some fiscal adjustment once the economy has recovered, should play “a key role” in returning the debt ratio to a safe downward path.

“Building up large fiscal balances, creating a fund, and reducing debt more rapidly over the next decade are options that are similar in impact and could help to smooth future fiscal pressures,” it adds.