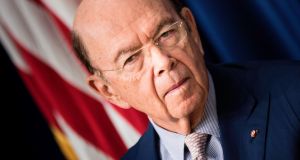 How are trade partners to respond when US policymakers talk nonsense? That is the situation in which Europeans, Japanese and South Koreans now find themselves. The words of Wilbur Ross, US commerce secretary, and the man who Donald Trump trusts most on trade policy, show one can be a billionaire and yet not understand how the economy works, just as one can be an athlete and not understand physiology.

He added: “We also have trade deficits with all three of those places. So they talk free trade. But in fact what they practice is protectionism. And every time we do anything to defend ourselves, even against the puny obligations that they have, they call that protectionism. It’s rubbish.”

It is what Ross says that is rubbish. A trade deficit is not proof that a country is open to trade. It is proof that it is spending more than its income or investing more than it saves. This is not just a theoretical point. Solid evidence supports it.

The Heritage Foundation, no less, provides an annual Index of Economic Freedom, which includes “trade freedom”. The think-tank, which prides itself on commanding influence in the Trump administration, derives the latter from data on trade-weighted tariffs and non-tariff barriers. The US, it shows, has far from the most liberal trade policies.

These measures of trade freedom can be combined with data on current account balances, adjusted for the size of economies. (On this basis the US deficit was 98th biggest out of 177 countries.) Just as theory predicts, no significant relationship exists between trade freedom and deficits. To the extent there is one, it is in the opposite direction: there is a weak tendency for liberal traders to run larger surpluses.

The idea that protection will reduce trade deficits does make intuitive sense. It is wrong, however, because the economy does not consist of isolated markets: everything is related to everything else.

Taxes on imports are also taxes on exports. If one imposes protection against imports, one pulls resources out of production for export. To put the point in other words, exports are just a way of supplying imports. If a country imports less, because of protection, the incentive to produce exports will, other things being equal, also fall.

The mechanism through which this is likely to happen, in the case of the US, will be a rise in the dollar as the demand for imports falls. Thus protection reduces ratios of trade to gross domestic product (making economies more closed), not trade deficits.

This has allowed the US to invest more than it saves. If it wishes to reduce its external deficits it must either lower investment (evidently, a bad idea) or raise savings. If it wishes to do the latter, the obvious start would be not to slash taxes, as planned, but raise them instead.

The US will propose the ludicrous objective of bilateral trade balancing in a world in which commerce itself is multilateral. This too will fail, for which foreigners will be also blamed. In all, the administration could demolish the open trading system simply because it is clueless.

The trading system has been the basis of post-second World War prosperity. This period has in turn been the most prosperous for humanity in history. An excellent recent paper from the IMF, the World Bank and the World Trade Organisation lays out both what is at stake and needs to be done to spread the gains from trade more widely.

In particular, it demonstrates that creating a safety net for affected workers and communities, combined with policies to support adjustment to change, is effective.

Yet that is precisely what the Republicans intend to weaken. Alas, that makes protection the only policy on offer to those adversely affected by economic changes, including imports.

What is frightening about the trade agenda of the administration is that it manages to be both irrelevant and damaging. A relevant agenda would focus on the imbalances in savings and investment across the world economy. A beneficial agenda would focus on combining the necessary adjustment to economic change, of which trade is a relatively small part, with widening shares in the gains and assistance with adjustment.

It would also recognise that trade has been one of the engines of economic dynamism. What is most worrying about trade has been the slowdown in its growth. That, the World Bank suggests, may be one reason for the productivity slowdown.

So how should trade partners respond to US demands? They need to accept the significance of macroeconomic imbalances. They need to make concessions that increase trade without damaging the global economy. They need to argue the case for multilateral liberalisation.

They need to do whatever they can to protect the principle of trade rules that bind both strong and the weak.

Above all, they need to be patient. The US should not be governed forever by those who have so little understanding of what is at stake. – Copyright The Financial Times Limited 2017

1 Money matters: ‘My father embarrassed us with his haggling’
2 Opioid executive admits to ‘no morals’ ahead of prison term
3 Pilita Clark: When a rude boss keeps you waiting, why not walk out?
4 Comcast acquires Irish cloud-based telco Blueface
5 US threatens retaliation against EU over proposed carbon tax
6 NI house builder apologises to Harry and Meghan over adverts
7 Explorer Petrel gets wider injunction to block sale of shares
8 Little strategic thinking in election manifestos of Fine Gael and Fianna Fáil
9 Are there annual limits on inheritances or gifts to a child?
10 South Dublin Credit Union members urged to borrow more to ensure survival
Real news has value SUBSCRIBE