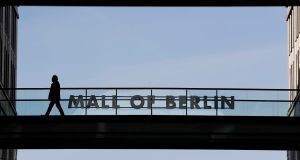 Core inflation, which excludes volatile prices of energy and unprocessed food and which the European Central Bank monitors closely, was revised up to 0.8 per cent year-on-year in March from an earlier estimate of 0.7 per cent. (Photograph: Fabrizio Bensch/Reuters)

Euro zone core inflation was higher than initially forecast, the European Union’s statistics office said on Wednesday, while confirming its estimate for the headline figure.

Eurostat confirmed inflation in March in the 19 countries sharing the euro slowed down to 1.5 per cent year-on-year from a four-year high of 2.0 per cent recorded in February.

But core inflation, which excludes volatile prices of energy and unprocessed food and which the European Central Bank monitors closely, was revised up to 0.8 per cent year-on-year in March from an earlier estimate of 0.7 per cent.

The core figure remained, however, lower than the 0.9 per cent recorded in February.

On a monthly basis, headline inflation was 0.8 per cent in March, in line with market expectations, while core inflation was 1.2 per cent higher, below the average forecast in a Reuters poll of 1.3 per cent.

The revised core data may slightly strengthen the hand of those who support winding down the ECB monetary stimulus, although inflation remains below the central bank’s target of inflation close but below 2 per cent over the medium term.

The ECB has slashed interest rates into negative territory and adopted a bond-buying program worth €2.3 trillion to counter the threat of deflation and revive growth in the 19-member currency bloc.

The statistics office confirmed prices for food, alcohol and tobacco went up by 1.8 per cent in March, from a 2.5 per cent increase recorded the previous month.

In the services sector, the largest in the euro zone economy, prices rose by 1.0 per cent in March, from 1.3 per cent in February.