Triggering of Brexit a tragedy for EU and Britain

If a deal is to be reached with the EU, the UK will need to make concessions

British Prime Minister Theresa May presses her case for a strong union with a speech in Scotland to civil servants working in international aid. Video: Reuters 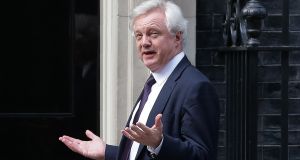 Britain’s Brexit minister David Davis. Brexiters will discover that all trade deals impose constraints on national autonomy, and the more market-opening the deal, the tighter the constraints

On Wednesday the British government is to notify the EU of its intention to leave. This will be a big moment in a tragedy; it will be a tragedy for the UK, but it will also be a tragedy for Europe. It is an appalling way to celebrate the EU’s 60th anniversary.

Even if the exit negotiations go well, the decision to leave the EU will have huge consequences for the UK. Economically it will lose favourable access to by far its biggest market. Politically it will create great stresses inside the UK and Ireland. Strategically it will eject the UK from its role in EU councils. The UK will be poorer, more divided and less influential.

Brexiters will deny all this. They are wrong. The evidence on modern trade is clear: distance is of enormous importance. The supply chains that link physical goods and services together work best over short distances. The models on which Brexiters rely ignore this reality.

This is also why the creation of the single market required substantial regulatory harmonisation, which allows relatively frictionless cross-border trade. Brexiters will discover that all trade deals impose constraints on national autonomy, and the more market-opening the deal, the tighter the constraints.

Brexiters will also learn that geography is political destiny. The UK can never be a non-European country. It will always be intimately affected by developments on the continent.

But now, faced with a threatening Russia, an indifferent US, a chaotic Middle East, a rising China and the global threats of climate change, it is removing its voice from the system that organises its continent. The UK is no longer in the 19th century. It is in the 21st. Isolation will not be splendid – it will be isolation.

Only someone ignorant of history would dream that Europe would be more prosperous, stable, influential, democratic and liberal if the EU shattered into 28 national pieces.

The system of nation states has repeatedly proved unstable. In this case, with the US increasingly withdrawn, the EU’s collapse might lead to a struggle for hegemony between Germany and Russia or, worse, a pact between them at the expense of weaker neighbours. If the EU does survive, as I hope, Germany will dominate. The Germans do not want this. Why do the British?

Yet Brexit is going to happen thanks to David Cameron’s folly in agreeing to the referendum, mismanaging the negotiations and bungling the terms of the referendum itself. Going through with Brexit is not a constitutional necessity; the referendum is not binding. But it is a political one: the Conservative party would shatter without it.

Yet the mood of the negotiations and their outcome are still to be determined. We know they are going to be complex and difficult. We know that the process of withdrawal and deciding upon the details of a new relationship are not going to be completed inside two years. But we do not know how these negotiations will be approached. This is not so true on the EU side, where priorities are clear, as on the UK side.

Failure to reach a deal on money owed, treatment of persons, shared institutions, the nature of future trade arrangements and the transition to them would poison future relations. Britain would be the bigger loser: the impact on Scotland might be terminal for the UK. Yet the effect of a brutal divorce on the EU would also be large.

If a deal is to be reached, the UK, as the weaker party, will need to make concessions, starting with the money owed. That is not only the sensible thing to do; it is the right thing to do. The country has obligations that come from more than four decades of membership. As a civilised and trustworthy country it must fulfil them.

This means, in turn, that the prime minister must be prepared to make a stand against those who desire no deal at all. The EU’s negotiating position is a reasonable one. The UK must be willing to reciprocate. It must make concessions to ensure a harmonious and co-operative relationship in future.

Theresa May has stated that “I am clear that no deal for Britain is better than a bad deal for Britain”. Let us hope that she does not believe this. Failing to reach a deal would be bad for everybody.

I no longer hope that Brexit can be avoided. That does not mean it needs to be welcomed. Still less does it mean that it does not matter how it happens. May must reach a deal that preserves as much as possible of the UK’s economic, political and strategic relations with the EU. History will judge her by how much of this she achieves. – Copyright The Financial Times Limited 2017