Irish house prices up nearly 11% in year to February 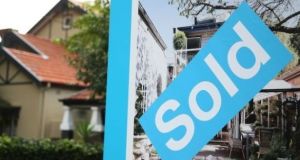 In Dublin, house prices climbed by 8.3 per cent in the year to the end of February.

Property prices rose by 10.7 per cent in the 12 months to the end of February, according to the latest property price index from the Central Statistics Office (CSO).

But the figures cast further doubt on Government figures for the supply of new homes in the State.

The year-on-year increase was nearly three percentage points higher than the annual rate of inflation recorded in January and comes on the back of a string of indicators pointing to a pick-up in house prices in the first quarter of 2017.

The Government’s new tax-incentive scheme for first-time buyers and a loosening of the Central Bank’s lending rules have been blamed for stimulating demand in the absence of an adequate housing supply.

Prices nationally rose by 1.5 per cent in February itself. In Dublin, where supply pressures are most evident, prices climbed by 8.3 per cent in the year to the end of February, having been as low as 2.2 per cent in September 2015.

A breakdown of the numbers shows the highest rate of annual house price growth around the capital was in Dublin city, at 9.2 per cent. Fingal had the lowest, with house prices rising just 3.7 per cent.

Residential property prices in the rest of State, excluding Dublin, were 13.2 per cent higher in the year to February.

Despite the increases, the index suggests prices overall are 30.7 per cent off their 2007 peak.

“The key uncertainty is how much extra momentum to Irish house price inflation has been added by the help-to-buy scheme and the loosening of the Central Bank mortgage lending rules,” he said.

In relation to newly built homes, Goodbody economist Dermot O’Leary said the CSO figures showed that 4,407 properties had been acquired in the last 12 months.

“This compares to the 15,256 ‘completions’ according to the Department of Housing (generated from electricity connections),” he said. “If we strip out self-build, the new completions figure would fall to about 8,500.

“It does not seem plausible that roughly half of newly completed homes have not been purchased over the past 12 months, adding further evidence to the view that the official completions figures are overstating the scale of new supply.”

A spokesman for Minister for Finance Michael Noonan reiterated that the supply of housing was “the Government’s number-one priority”.

He said that the help-to-buy scheme would be reviewed, and the process would be completed by the end of August, in time for Budget 2018. That process has not yet commenced, though a tender process is ongoing.

Last week, Mr Noonan told the Oireachtas budget oversight committee that, based on the volumes and values of house prices, the help-to-buy scheme could not have moved the market prices, his spokesman said.

Fianna Fáil housing spokesman Barry Cowen said the news of accelerating house price increase was “alarming news for people who are desperately struggling to buy their own home”.

“There is little point having a help-to-buy scheme for first time buyers if it’s only impact on the ground is to lead to unsustainable house price increases right across the country, as is now clearly the case,” Mr Cowen said.

“We simply can’t have a situation where house price inflation is 10 per cent and above year on year,” Mr Cowen said.