Election win will clear the way for May’s Brexit vision

London Briefing: The British prime minister’s gamble could pay off nicely for the UK 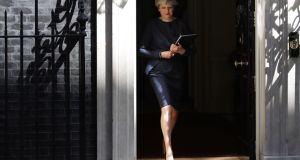 The next step: British prime minister Theresa May prepares to make her statement outside number 10 Downing Street, calling for a general election on June 8th. Photograph: Dan Kitwood/Getty Images

Recent experience of polls should have taught us all that there’s no such thing as a certainty, but the City is convinced that Theresa May’s government will romp to a decisive victory in the snap June 8th general election.

If City traders had expected to ease themselves back to work after the Easter break yesterday, May’s shock mid-morning announcement that the ballot boxes will be brought out three years ahead of schedule soon put a stop to that.

Sterling soared to a four-month high above $1.27 while the FTSE 100, dominated by big overseas earners that benefit when the pound is weak, tumbled by 180 points, or 2.5 per cent. This was its worst day since last June’s Brexit referendum.

May had repeatedly ruled out a snap election but clearly wants to capitalise on the Conservative party’s lead in the polls, currently running at more than 20 per cent.

If May does turn the Conservative government’s slim majority of just 17 into a three-figure lead, as most observers believe she will, then the prime minister will be far better placed to pursue her own vision of Brexit.

A victory would give May a personal mandate from the British electorate, something she lacks currently

This raises the prospect of a softer deal than the “hard” Brexit demanded by the Tory party’s vocal Eurosceptic backbenchers. Analysts at Deutsche Bank also believe a convincing election victory for May will make the deadline to deliver a “clean” Brexit without a lengthy transitional arrangement by 2019 “far less pressing”, given that there will now be no election in 2020.

The prospect of a much longer transitional period “materially reduces the ‘crash risk’ of Brexit negotiations”, they say.

A victory would give May a personal mandate from the British electorate, something she lacks currently, which may in turn force her European counterparts to accord the British prime minister a little more respect during the lengthy Brexit trade negotiations.

A new manifesto will also give May the opportunity to junk promises made by the Cameron administration at the time of the last election in 2015, such as the pledge of no tax increases, allowing her more room for manoeuvre.

Justifying her abrupt U-turn, May said that if she did not hold an election now, the “political game-playing” of the government’s critics would continue.

“Our opponents believe that because the government’s majority is so small, our resolve will weaken and that they can force us to change course . . .”

Her campaign got off to a good start as the International Monetary Fund upgraded its forecasts for the UK for the second time in three months, again admitting it had overestimated the impact of the Brexit vote.

It now expects the UK economy to grow by 2 per cent this year, which would make it the second-best performer among advanced economies, after the United States. In October, it had forecast 1.1 per cent, which was raised to 1.5 per cent in January.

It remains to be seen whether those forecasts will remain intact after Britain has endured the uncertainty of a seven-week election campaign.