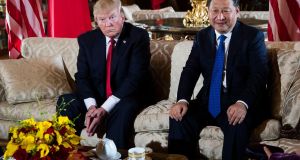 A meeting between President Donald Trump and President Xi Jinping of China in April 2017. Photograph: The New York Times

China’s Xi Jinping will hold high-stakes talks with US president Donald Trump this week at the G20 meeting of rich nations in Buenos Aires, and markets are hopeful the leaders of the world’s two biggest economies can find a resolution to their bitter trade war.

The meeting is due to take place on Friday, November 30th. While advance indications have been that they may find common ground, Mr Trump tempered hopes of a ceasefire when he said on Tuesday that he was likely to go ahead with a rise on tariffs currently imposed on Chinese goods, including iPhones and laptops.

Few expect a detailed compromise to emerge based on Mr Trump’s past form. Some kind of a framework agreement is more likely.

Relations between China and the US have been tense since Mr Trump started to introduce tariffs on Chinese goods imported into the US, introducing extra tariffs of 10 per cent on $200 billion (€177bn) of Chinese products, levies that are due to increase to 25 per cent by the end of the year.

The US is trying to pressure Beijing to cut subsidies and improve market access to US firms, as well as narrow a €331 billion trade gap.

For its part, China has imposed levies of $60 billion (€53bn) on US goods, and both have already imposed tariffs of around $50 billion (€44bn) on each other’s goods.

The US president said last week he was ready for the talks. “I have been preparing for it all my life. I know every ingredient, every stat. I know it better than everybody knows it. My gut is always right. China wants to make a deal. If we can make a deal, we will.”

In a paper for international media organisation Project Syndicate, economist Stephen Roach said the alternatives to a principled compromise posed grave risks for both the US and China, including an ever-escalating trade war, a cold war, or even a hot war.

“These risks can be avoided, but only if both leaders are willing to engage in principled compromise,” said Mr Roach, a faculty member at Yale University and former chairman of Morgan Stanley Asia.

“In light of contentious recent developments between the US and China, it is hard to be optimistic that a meaningful breakthrough is at hand. An agenda of substance should be used as a checklist against any accord that may be struck by Trump and Xi. The world is watching.”

China is the largest holder of US Treasuries. At the weekend the Global Times newspaper reported that China had cut its holdings of T-Bonds in September in a move aimed at supporting the yuan rather than getting back at the US amid the ongoing trade war.

Data last week showed that China held $1.15 trillion (€1 trillion) of US Treasuries by the end of September, down by $13.7 billion (€12bn) from the previous month.