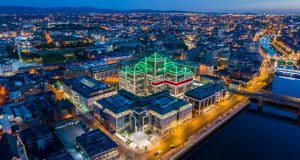 Central Bank executives are resisting calls to potentially make it easier for borrowers to get exemptions from mortgage-lending limits, as the regulator finalises its annual review of the rules. The Central Bank introduced rules in February 2015 to restrict the amount of money banks can give out to mortgage borrowers, in order to avoid a repeat of Europe’s worst property crash. While banks are broadly supportive of the lending restrictions, some have found it difficult to work with the exemptions on a calendar year basis, particularly as a large volume of loans approved late last year in a recovering market were only drawn down in the first half of 2018.

The “backstop” solution to avoid a hard Irish border post-Brexit should not be feared, UK prime minister Theresa May told Northern Ireland businesses at an event in Downing Street. As part of her campaign to win support for the draft divorce deal ending the UK’s 45-year membership of the EU, Mrs May invited about 40-50 business representatives from Northern Ireland to a reception on Thursday evening. Earlier in the day she told the House of Commons that preparatory work on alternative arrangements to avoid implementing a backstop would begin before Britain leaves the EU next March. Denis Staunton reports that Britain will seek the cooperation of Irish authorities in exploring technological solutions to keeping the Irish Border open after Brexit if EU leaders approve a draft deal next Sunday.

Ulster Bank is preparing to quit its headquarters on George’s Quay in Dublin 2 after more than two decades and split its remaining staff in the complex between its old College Green base and Leopardstown, almost 10km south of the city centre. Ulster Bank began transferring hundreds of staff to its Leopardstown facility four years ago as it scaled back its George’s Quay presence dramatically. The premises currently accommodates 500 employees.

Profits at builder Park Developments’ main business almost doubled to €11.3 million last year, according to the latest figures. Park exited Nama in June by paying off a reported €300 million-plus debt to the State assets agency with fresh borrowings from Bank of Ireland and AIB secured on the group’s assets. The group is building new homes on sites in Clay Farm, Hamilton Park, Fernbank and The Park in Carrickmines in south Dublin.

The ongoing housing crisis was highlighted by the leader of the Republic’s most influential business lobby groups. American Chamber of Commerce in Ireland’s president, Barry O’Sullivan, told the organisation’s annual Thanksgiving lunch yesterday that affordable housing was a “key ask” for US employers in the Republic. Ensuring that workers get access to affordable homes must be a priority for Government he said.

In this week’s Agenda feature, Peter Hamilton looks at the rapid growth in build-to-rent developments and considers how the Irish rental market is in dire need of change.

Finance Ireland, the State’s largest non-bank retail lender, plans to raise equity late next year in a fresh fundraising round as the business continues to grow, though the prospect of a long-awaited stock market flotation remains two years away, according to its founder and chief executive. Speaking in an interview with The Irish Times, Billy Kane said that Finance Ireland, which has raised €85 million selling a combined 62 per cent stake in the business to US investment house Pimco and the Ireland Strategic Investment Fund (ISIF) since 2015, had no immediate need for fresh equity.

Lidl and Aldi say that rivals object to up to 80 per cent of their planned new stores. In his Caveat column, Mark Paul asks who will stop supermarkets weaponising the planning system?

Finally, in his economics column John FitzGerald fears that permanent emigration of those with key skills could be a serious loss to the economy. In particular, addressing the high emigration rate and low return rate of medical graduates should be made a priority.