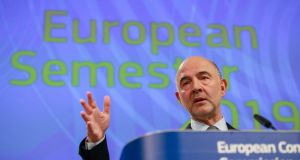 Pierre Moscovici said Greece’s plan to run a surplus of 3.5 per cent of GDP would allow the government to cancel much-feared pension cuts. Photograph: Stephanie Lecocq/EPA

Paschal Donohoe’s budget, and those of 10 euro states, have been given a clean bill of health by the European Commission in its review of euro member states’ budget plans. The commission has warned Italy however that it faces the risk of “particularly serious non-compliance” and will face measures under the EU’s Excessive Deficit Procedure.

The commission reports that 10 of the proposed budgets, including that of Greece, are fully compliant with the provisions on debt and deficit set by the Growth and Stability Pact. Three states are “broadly compliant” and five states – Belgium, France, Portugal, Spain and Slovenia – are warned that they risk “non-compliance” and should adjust their plans.

In its report on the Republic, the commission is satisfied by the Government’s debt-reduction success but again warns of the uncertainty Brexit poses to the country’s fiscal position. The report is favourable to VAT-reduction measures but expresses unease about measures to broaden the tax base.

In its post-bailout surveillance visit to Dublin last week, commission officials also expressed support for measures to “build resilience” such as the rainy-day fund.

The six-month-long semester review process, the EU’s cycle of economic and fiscal policy co-ordination launched in 2011, opens in November with an initial opinion from the commission on member states’ draft budgetary plans. This is followed in December by bilateral meetings with individual member states and a discussion of the opinion at the European summit.

It also notes that the variation in growth rates across the euro zone is the smallest in the history of the Economic and Monetary Union, a sign of growing convergence of the economies.

However, the report warns that “low productivity growth; income inequality and slow reduction in poverty; disparities; high public and private debt; and other remaining macroeconomic imbalances” are “persisting vulnerabilities”.

Commission vice-president Valdis Dombrovskis told journalists of the need in good times to “reduce debt and create buffers”. He paid particular tribute to Greece’s success in emerging from crisis to compliance, and economic affairs commissioner Pierre Moscovici said Greece’s plan to run a surplus of 3.5 per cent of GDP would allow the government to cancel much-feared pension cuts.

In a clear allusion to Italy, he said Greece showed that efforts to apply fiscal discipline pay dividends in terms of growth and social justice.

Other concerns in the report include “rising protectionism and geopolitical tensions affecting trade relations … slow diffusion of new digital technologies; gradual withdrawal of central bank stimulus,” and, in an implied criticism of member states and the Council of the EU, a “loss of reform momentum”.