Following on from the special meeting of the European Council, UK Prime Minister Theresa May makes a statement on the forthcoming Brexit negotiations. 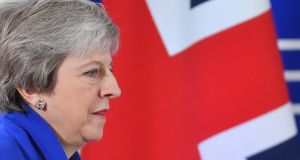 British prime minister Theresa May arriving to give a press conference after a special meeting in Brussels of the European Council to endorse the draft Brexit withdrawal agreement. Photograph: Getty Images

No simple answer has ever emerged from all of the detailed analysis of who voted for Brexit and why. Some of the many published studies conflict with each other, but most agree that older, less educated, poorer, unemployed people were more likely to vote Leave. Towns or cities with heavy exposure to manufacturing industry were particularly eurosceptic.

A recent piece of research from academics at the University of Warwick provides a blunt summary: “We find that voting Leave is associated with older age, white ethnicity, low educational attainment, infrequent use of smartphones and the internet, receiving benefits, adverse health and low life satisfaction”.

That is by no means the whole picture: plenty of rich, university educated – even privately educated – white, middle aged men are fervent europhobes. Just take a look at any recent photo of the European Research Group: those men (almost always) dedicated to replacing Theresa May and achieving the hardest of all possible Brexits.

The sight of many of these chaps putting their own careers ahead of anything resembling the national interest has sparked a most unexpected wave of sympathy for the prime minister.

May can be as populist as her critics. She said this week that EU citizens would no longer be able “to jump the queue” after Brexit. This reveals Brexit’s deepest dividing line, the gulf between those who see freedom of movement as the defining value of European civilisation and those who, at the very least, do not.

As with her much earlier “citizens of nowhere” speech, May’s deepest instincts are revealed to be nativist. She really doesn’t like immigration. Her tenacity and obvious desire to do what she believes to be right has brought deserved kudos in recent days but it is important to be clear about those beliefs. For the prime minister, immigration is the biggest problem that Britain must solve.

This column has previously likened all of this to an episode of Father Ted. But the political intrigue and (metaphorical) backstabbing, belief in magic, the willingness to demand any sacrifice of others, putting personal ambition ahead of all other things – it’s more like Game of Thrones; albeit without, thankfully, the nudity.

That point about the objectives of the Brexiteers is an important one. We have suspected for some time that their secret desire is for a complete rupture with Europe. For all their bluster about renegotiating the withdrawal agreement, the agenda is now very clear. They want Britain to Leave, without honouring any liabilities, and to begin trading “on WTO terms” with Europe and the rest of the world. Closing Britain’s borders is the prize they seek.

At least it is a form of honesty: their in-house economists cheerfully admit that manufacturing and agricultural employment would be devastated following this version of Brexit. I wonder if they think about what that means for the typical Brexit voter, as identified by all that research.

Those characteristics of Leave voters aren’t discussed much: the moment we start talking about people on benefits, the less educated, we are accused of sneering. The conversation is, therefore, effectively shut down.

There are important lessons, albeit ones that will never be learned if we are not allowed to talk about the issues. One key take-away is the split between successful cities and regions that struggle with their distance – both economic and cultural – from the booming metropolis. Disgruntled Leavers don’t typically live in economically successful parts of the country.

London isn’t really a British city, at least not one that closely resembles anywhere else. One way the cities of the UK are alike is the way in which they voted: most wanted to stay in the EU. Cardiff, like London, is a capital city. Differences between them are quite stark but they both voted to remain. But outside the Welsh and English capitals live many of those those unhappy Leavers, so starkly identified by those Warwick researchers.

So, one lesson to be drawn from all of this is that any nation that neglects regional development, any government that sees city development and rural decline as just facts of life, is storing up a potential populist backlash.

There is a long debate about whether something should be done to soften the economic gap between city and region. Indeed, much money is spent on regional development.

One of the ironies of Leave-voting areas of Britain is the fact that they have been the beneficiaries of much EU largesse. Making a material regional difference is very hard – just ask inhabitants of swathes of the south Wales valleys, parts of northeast England or the poorer bits of Northern Ireland.

That cash may have been better spent elsewhere: all that regional assistance may have merely kept people in place, in gently declining towns and villages, with the only result that resentment grows in direct proportion to that decline.

Alternatively, it could be that more and better assistance is needed. Whatever the answer it is clear that regional gaps have been at the heart of the British populist backlash. Other countries take note: celebrate the booming cities but neglect the regions at your peril.