OECD warns of another ‘boom-and-bust cycle’ in Irish economy 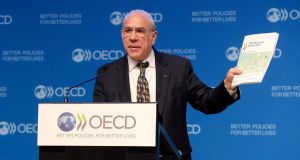 The Paris-based Organisation for Economic Co-operation and Development (OECD) has warned of another possible boom-and-bust cycle in the Irish economy if the current pick-up in housing triggers a “surge in credit growth”.

In its latest global outlook the organisation said rising property prices were becoming a concern for competitiveness “and for housing affordability for low-income households”.

And while new housing completions have been catching up with demand, there would continue to be shortages in the dwelling stock for some time.

The think-tank warned that the buoyant housing market as well as supporting employment was driving strong credit growth even with the Central Bank’s strict lending rules.

Recent figures from the Central Bank show new mortgage lending jumped by 22 per cent to €3.75 billion in the first six months of this year.

“Property prices may increase more strongly than projected, which would further boost construction activity in the near term, but may lay the foundation for another boom-and-bust cycle if associated with another surge in credit growth,” the OECD said in its report.

In a special chapter on the Republic, the OECD said the Government needed to be ready to ease its fiscal stance “to mitigate the impact of a potentially disorderly conclusion to Brexit negotiations.” It noted that Ireland would be one of the hardest hit EU countries in such an outcome.

The Government has been engaged in a long and arduous process of fiscal tightening since the crash.Despite the tax buoyancy of recent years it is, however, still running a small budget deficit (spending more than it raises in revenues), but it expects to achieve a budgetary surplus until 2020.

In its report the OECD said economic activity in Ireland was projected to remain robust, but to ease gradually in the coming years. It forecast economic growth of 5.9 per cent this year and 4.1 per cent in 2019, marginally below official Government forecasts.

However, it noted that as the economy approached full employment, job growth would moderate, “while wage pressures will be significant, feeding into higher inflation”.

Already the Central Bank is forecasting wage growth of about 3.3 per cent next year, and 3.4 per cent in 2020.

1 ‘No demand... because there are no people’ at well-known Dublin pub
2 HSE says fix for Covid Tracker app rolled out to all Android users
3 Face masks developed in Ireland could help meat-plant workers
4 Bank of Ireland does U-turn after refusal to reimburse ‘smishing’ victims
5 UK criticised for ‘unforced errors’ on post-Brexit trade deals
6 Nearly 30,000 could lose pandemic payment if they do not confirm eligibility
7 MSD buys Takeda biologics plant in Dunboyne
8 Dublin-based AR tech company Antikytera secures investment
9 What will the office market look like after the great remote working experiment?
10 Help, I’ve no PRSI stamps – can I still get a pension?
Real news has value SUBSCRIBE