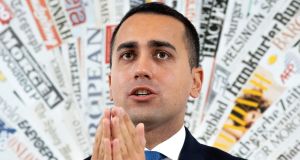 The European Commission wants to launch disciplinary proceedings against Italy over concerns that profligate spending plans by the country’s populist government could trigger another euro debt crisis. The commission would apply the sanction under its Excessive Deficit Procedure, citing “particularly serious non-compliance” with the EU’s debt-reduction rules.

If the proposal is approved by ministers in the next fortnight, economic affairs commissioner Pierre Moscovici said, the proceedings will be tabled. The move follows a war of words between Brussels and Rome since the announcement in October that the latter would allow its deficit to rise to 2.4 per cent of GDP.

The commission was acting in line with its powers of scrutiny of the national budgets of the 19 euro-zone states under the Stability and Growth Pact, known as the “semester” process. It could see Italy face substantial fines of up to 0.2 per cent of GDP in addition to a freezing of EU funds and EU monitoring of Italy’s issuance of new sovereign bonds.

Italian borrowing costs have climbed since the government’s fiscal fight flared up last month, but to date, market observers say, it isn’t blowing up to crisis levels. In fact the price of Italian debt rallied on Wednesday on reports that the government could be ready to compromise on its budget.

This came after European Commission vice-president Valdis Dombrovskis warned that Italy should move to comply with EU rules.

“Uncertainty and rising interest rates are already taking their toll on Italy,” he said.

He said Italy’s debt, at 131 of GDP, represented a personal debt of €37,000 per capita or interest payments annually of €1,000 per head. If sustained this debt “will result in more austerity down the road”.

Placing the blame for the EU measures firmly on Italy’s populist government, Mr Moscovici said it was “the unavoidable consequence of the decision not to modify fiscal targets”.

The EU remains ready at any time to talk to the government, he said, but stressed that it should engage “constructively”. The dialogue to date has been at megaphone level and highly polemical.

The Excessive Deficit Procedure process is likely to take months and will require backing from euro ministers – at last week’s eurogroup meeting they made clear their strong support for a resolute stand by the commission. According to the rules, Rome can have up to six months to show the commission it is bringing its debt down before facing any fines.

The Italian PM Giuseppe Conte is due to come to Brussels on Saturday for a discussion on the issue with European Commission president Jean-Claude Juncker.

The Stability Pact rules require that public debt cannot be higher than 60 per cent of GDP, or if it is, it must be falling towards 60 per cent at a satisfactory pace.

Rome insists that expansionary measures are needed to head off an economic slowdown affecting the whole of Europe, and that its growth – its projections are hotly contested – will create the resources needed to pay down debt at the required rate. Its proposed government deficit for 2019 at 2.4 per cent is three times the level of the previous government.

Italy’s government is ready for dialogue over the country’s debt but the commission can’t seek to “massacre Italians” by trimming expenses aimed at boosting growth, deputy prime minister Luigi Di Maio said in an interview on Tuesday.

“We are ready to make major cuts on wasteful spending,” Mr Di Maio told daily Corriere della Sera. “We would also eventually be ready for safeguard clauses that would protect against deficit widening. But the big reforms of this budget law need to remain in place.”

1 Sacrificing pubs for schools: Ireland’s latest Covid trade-off
2 Owner of Dundrum Town Centre to sell prized assets
3 Elderly parents living in property you own will save you on capital gains tax
4 Hiring right people is key in Meath liqueur firm
5 How safe is it to go back to the office?
6 How to . . . move (almost) everything to your new phone
7 IPL to pay deal-breaker fee if it finds better offer than €350m
8 Roll up, roll up: capitalism will drive cannabis legalisation in Ireland
9 How Tony Buzan used mind maps to doodle his way to millions
10 Eggs in a bottle – liquid gold for free-range producer
Real news has value SUBSCRIBE