In the North, 21% per cent of 30-34 year olds have not completed their post-primary education 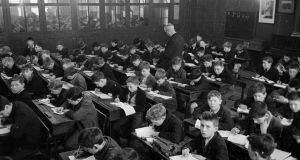 Crowded classroom where 248 children are taught at once in a Belfast school: Northern Ireland urgently needs to reform its educational system to deliver better results for children of all abilities and backgrounds.

At the birth of the State, the education system north and south of the Border was similar, with universal free primary education, and a fee-paying post-primary system. Only a minority of pupils progressed beyond primary level, an even lower share than was the norm across northern Europe. Since then, the two education systems have diverged significantly.

Free post-primary education was first introduced in Northern Ireland in 1947, following the UK’s 1944 Education Act. The new system streamed pupils into two separate types of school based on exam scores at the age of 11: grammar schools for the top 30 per cent of pupils, and secondary moderns for the other 70 per cent. While England has since modified the rigid system of selection through such reforms as comprehensive schools in the 1960s, Northern Ireland still retains the selective system of secondary education, with children’s fate determined at the age of 11.

Ireland only introduced free second-level education in 1967, 20 years after Northern Ireland. While we already had parallel secondary and vocational schools, mirroring to some degree the UK twin tracks, we never had a selection process to assign pupils to one or other track. Under free education, secondary schools evolved to cater for students with a mix of abilities, both academic and practical, under the one roof. This was reinforced by amalgamations in many Irish towns of their separate post-primary schools, and the establishment of comprehensive and community schools.

Streaming within Irish schools has also sharply diminished, in the light of research findings that this is harmful for weaker pupils, and is of little benefit to more able children.

Research by the University of Ulster’s Vani Borooah shows how damaging the selective nature of the Northern Ireland education system has been for that economy and society. In Northern Ireland today, 21 per cent of 30-34 year olds have not completed post-primary education, the highest in any UK region. It contrasts with a figure of 9 per cent for Ireland.

While 95 per cent of grammar schools score well, Borooah concludes that Northern Ireland’s secondary schools, taken collectively, “fail to meet the minimum acceptable standard for post-primary schools in England”. Protestant schools in this category do particularly badly – only 33 per cent of children reach the requisite standard, compared to 41 per cent in Catholic schools. Disadvantaged Protestant boys in such schools do worst of all, with only 20 per cent of them reaching the required standard, lower than the 33 per cent for equivalent Catholic boys. The figures for girls are marginally better.

This outdated selective system of secondary education has resulted in Northern Ireland having the lowest human capital of any UK region. It has a high proportion of early school leavers, and the proportion of thirtysomethings with a degree, at 35 per cent, is twenty percentage points lower than in Scotland or Ireland.

Education matters in terms of economic growth. The research evidence shows that much of Ireland’s economic success is attributable to the investment in education we made over the last 40 years. Scotland, the fastest-growing region in the UK outside London, is likewise reaping returns on its investment in a high-quality education system. The converse is also true. Northern Ireland, with the least-educated workforce, is the slowest-growing region in the UK. The Northern Ireland Department of the Economy recently published research showing how the low proportion of graduates in its workforce limits Northern Ireland’s attractiveness for foreign direct investment.

Many studies have shown that poor education and high dropout rates perpetuate a cycle of deprivation and alienation in future generations. In Ireland, this has been an important focus for policy intervention since the 1990s. This has included the Deis programme for disadvantaged schools, and heavy investment in supports for students with additional education needs. While success has come slowly, at last our rate of early school leaving has fallen to just 6 per cent of pupils now leaving before completion of post-primary school.

Northern Ireland urgently needs to reform its educational system to deliver better results for children of all abilities and backgrounds. However, the lesson from the Irish experience is that such a reform will take decades to fully pay off. Raising the educational attainment of tomorrow’s school leavers, and increasing the proportion of graduates, may take 20 years before the scale of impact on the quality of the workforce begins to deliver a significantly improved economic performance.

Addressing the education gap for disadvantaged boys is particularly urgent. The limited job opportunities facing a large number of young men who leave school early is a recipe for alienation and social problems, particularly with Northern Ireland’s sectarian divide.