Additional figures show 4,142 mortgages were approved in the month of March 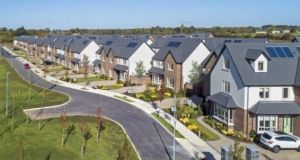 First-time buyers accounted for 47.3 per cent of all mortgages drawndown during the first three months of this year

Some 8577 new mortgages were drawn down by borrowers in the first three months of the year, up 8.9 per cent compared to the same quarter in 2018.

New figures from Banking and Payments Federation Ireland (BPFI) show the combined value of these mortgages totalled €1.88 billion, up 10.6 per cent year-on-year.

Mortgage drawdowns were significantly lower than the previous quarter when 12,113 loans for homes were drawn down. This is no surprise however, as the first three months of the year are usually the weakest with the latter months, the strongest.

“The number and value of mortgages actually drawn down by borrowers during the first quarter show good growth on corresponding 201 activity. This reflects the appropriate response by lenders to increased demand for mortgage finance,” said BPFI director of public affairs Felix O’Regan.

First-time buyers accounted for 47.3 per cent of all mortgages drawndown during the first three months of this year, with a further 37 per cent of volume linked to switching.

Additional figures provided by BPFI indicates that 4,142 mortgages were approved in March, up 22.8 per cent year-on-year and up 23 per cent versus the prior month.

“The uplift in the number and value of mortgages approved in March indicates that further growth in drawdown activity can be expected,” Mr O’Regan added.