Biggest contributor was Ervia, the operator of Irish Water and Bord Gáis 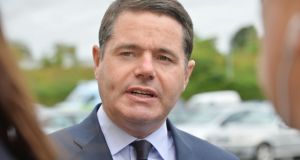 Minister for Finance Paschal Donohue: the second-largest dividend last year was paid by the DAA, totalling €37.4 million, according to the Minister. Photograph: Alan Betson

Commercial semi-State companies last year paid out dividends of €261.19 million to the State, according to Minister for Finance Paschal Donohue. This brings the total dividends from these companies to €2.4 billion since 2010.

The biggest contributor last year was Ervia, the operator of Irish Water and Bord Gáis, which paid a dividend of €139 million. This was down on the €148 million it paid to the Government in 2017.

In a written Dáil reply to Fianna Fáil finance spokesman Michael McGrath, Mr Donohoe said the next largest dividend last year was paid by the DAA, totalling €37.4 million. This followed a year of record passenger numbers at Dublin Airport and represented an increase of 28.5 per cent on the previous year.

A number of other semi-State firms significantly increased their dividend pay out last year. The Irish Aviation Authority paid out €19.45 million, more than double the €9.24 million it paid in 2017.

Shannon Foynes Port company increased its dividend by 20 per cent to €300,000 while Eirgrid remained static at €4 million.

The dividends paid by commercial semi-States during the nine-year period reached a peak in 2014 when €470.6 million was paid to the State, driven by ESB and Ervia.

Mr McGrath said that while dividend payments have been an important source of revenue for the Government in recent years “it should be recognised these dividends are ultimately being paid by the end consumers buying goods and services from these companies”.

He argued that “consumers are better served in the end by lower prices rather than massive dividend payments going back to the central exchequer”.