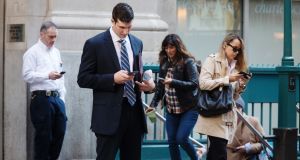 Laura Slattery considers the increasing challenge for outdoor advertisers with our pavements filled with so-called smartphone zombies, glued to the screens in the hands and not the billboards around them

The communications regulator has confirmed it is paying rebates to mobile operators who successfully bid for space on the State’s radio spectrum nearly two years ago as they can’t fully access it to roll out new services, including 5G. Charlie Taylor reports the successful bidders are becoming increasingly frustrated at the fact that they are unable to proceed with their network plans because an existing operator, who was using the spectrum prior to the auction, has yet to fully vacate from it.

There are 150 new engineering and IT development jobs heading for Galway as the billion-dollar valued US fashion tech company, Rent the Runway, aims to open its first international technology company in the city.

It’s EY Entrepreneur awards time again and the 24 Irish finalists for this year have just been announced. Charlie Taylor goes through the shortlist in all three categories.

Developer Brian M Durkan & Co has been given the go ahead to build 265 apartments for rent on the site of a disused paint factory in Dublin under the fast-track housing scheme, in a move set to anger nearby residents. Barry O’Halloran has the details.

In our Personal Finance features today, Fiona Reddan explains how to cash in on the house price recovery, while in the midst of earning season Prionsias O’Mahony advises that its time to take analysts with a pinch of salt.

Finally, in her weekly media and marketing column, Laura Slattery considers the increasing challenge for outdoor advertisers with our pavements filled with so-called smartphone zombies, glued to the screens in the hands and not the billboards around them.