Italians set to oppose Spanish minister for ECB job, according to reports 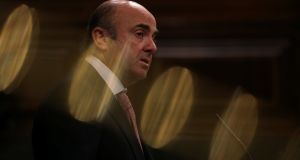 Spain’s economy minister, Luis de Guindos: The Italian newspaper Corriera della Sera reported on Sunday that Rome will oppose his nomination for the next vice-president of the ECB

The Italians look set to oppose the nomination of Spain’s economy minister Luis de Guindos as the next vice-president of the ECB. He is up against Central Bank governor Philip Lane for the role.

Although de Guindos remains a hot favourite for the job there has been pushback against his candidacy which will be considered today by the 19 members of the Eurogroup and then voted on Tuesday by the same ministers in the formal context of Ecofin ministers.

The Italian newspaper Corriera della Sera reported on Sunday that Rome will oppose the nomination of the Spaniard who it regards as a long-standing acolyte of outgoing German finance minister Wolfgang Schaeuble whose conservative views on monetary policy are anathema to Italy. Germany and France have openly backed him, while Portugal, Malta, Slovakia and Latvia already have said they intend to support Spanish economy minister.

The paper also speculates that the nomination of “southerner” de Guindos would make more unlikely a potential Italian replacement for the bank’s president Mario Draghi next year.

And Spanish papers are expected to raise issues around his role in the alleged fire sale of Lehman Brothers assets just before it collapsed. He chaired the bank in Spain and Portugal .

Such concerns will play into worries expressed by MEPs about the elevation of a politician without central banking experience to the ECB, and some socialist concerns at his involvement with “austerity” politics in Spain.

Although senior EU officials hope the appointment on Tuesday will be agreed by consensus there is no likelihood of Lane’s candidacy being withdrawn by Ireland. Under the union’s complex qualified majority voting system De Guindos will require 14 of the 19 votes, representing some 65 per cent of the euro zone’s population.