Data reinforces expectations of a rise in interest rates in May 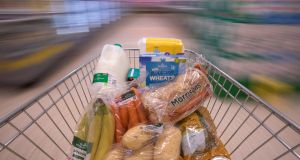 The BoE surprised investors last week by saying interest rates would need to rise sooner and by somewhat more than it had previously expected. Photograph: Jon Super/PA Wire

British inflation unexpectedly held close to its highest level in nearly six years in January, highlighting the challenge facing the Bank of England and reinforcing expectations of a rise in interest rates in May.

Consumer price inflation held at an annual rate of 3.0 per cent in January, unchanged from December, after hitting its highest since March 2012 in November at 3.1 percent, the Office for National Statistics said. Sterling rose after Tuesday’s data and was up by 0.5 percent against the dollar at 1035 GMT. British government bond prices fell in contrast to a rise in the price of German bunds.

Inflation jumped in Britain after the June 2016 decision by voters to leave the European Union, which hammered the value of the pound and pushed up the cost of imports. By contrast, many other countries are facing below-target inflation despite strong economic growth.

The BoE surprised investors last week by saying interest rates would need to rise sooner and by somewhat more than it had previously expected, as it wanted to get inflation back to target within two years rather than three. Markets priced in as much as a 70 per cent chance of a quarter-point rise in interest rates by May, and a roughly 50 per cent chance of a further increase in rates to one percent by the end of the year - a level last seen in 2009.

Economist Lucy O’Carroll of Aberdeen Standard Investments said inflation appeared to have peaked as the impact of the pound’s fall after the Brexit vote began to fade. Nonetheless, signs of a pick-up in wages suggested that price growth might be slower to fall than the BoE hoped.

“Even if inflation drops back a bit further from here, it looks likely to settle at a higher level than the Bank of England feels comfortable with. It will also mean slightly higher interest rates than we’ve been used to,” she said.

Tuesday’s CPI data showed downward pressure on inflation from a lesser increase in fuel prices than a year ago. But the ONS highlighted a smaller than usual seasonal decline in the cost of visiting zoos and gardens as pushing up on price growth.

Core consumer price inflation - which excludes food, energy, alcohol and tobacco - rose to 2.7 per cent from 2.5 per cent, and services price inflation, which is more sensitive to wage costs, also accelerated. BoE policymakers have pointed to rising wages as a possible reason to increase rates, although headline data still shows average growth in weekly earnings well below the rate of inflation, squeezing on living standards. The ONS figures suggested less pressure in the pipeline for food and manufactured goods.