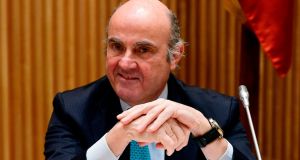 The European Central Bank’s second-highest post is Spain’s to lose, a survey of euro-area governments indicates.

Portugal, Malta, Slovakia and Latvia already have said they intend to support Spanish economy minister Luis de Guindos over Central Bank of Ireland governor Philip Lane to be the next vice president of the ECB. Officials from Austria, Cyprus and Finland say they are leaning toward supporting Mr Guindos, according to the Bloomberg survey.

While the Government says support for its candidate “is building,” none of the currency bloc’s remaining governments signalled an intention to vote for Prof Lane, declining to comment when asked by Bloomberg.

Countries can still change their minds before the euro-area finance ministers decide on the matter at a meeting on February 19th in Brussels.

Heavyweights including Italy are refusing to show their cards, and informal hearings for the candidates at the European Parliament on Wednesday could yet shift the mood.

A German government official said that the State has hardly lobbied at all for its candidate and that Dublin’s intention may be to push instead for the ECB chief economist job when Peter Praet’s term expires next year.

While the European Parliament will informally grill Mr Guindos and Prof Lane on Wednesday in Brussels, the assembly has no power to block the appointment. The final decision is taken by an enhanced majority of the euro area’s 19 national governments.

Finland will officially decide which candidate it will support on Friday, finance minister Petteri Orpo said in a message relayed by his spokesman, adding that Mr Guindos’s experience makes him a strong candidate. Spain has grounds for increasing its representation in European institutions, he added.

The Minister for Finance Paschal Donohoe “is fully supportive of Governor Lane’s nomination to the VP position in the ECB and is confident that there is solid support for Ireland’s candidate, which is building,” the Department of Finance said in a statement.

“We will continue to outline Philip’s qualities and his exemplary track record to all member states who will have a vote, across the coming days.”

The winner starts in June and gets a seat at the top table as the ECB maps a path out of emergency stimulus.