House prices in Dublin increase 10.8%, while the cost of apartments climbs 14.7% 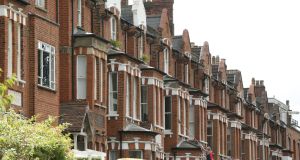 The growth of residential property prices is accelerating with a 12.3 per cent increase recorded in the 12 months to the end of December, new Central Statistics Office (CSO) figures show.

The data shows that prices increased at a far sharper rate than in the period to the end of December 2016 , when they were up by 9 per cent. Average prices were up 11.4 per cent in the 12 months to the end of November, the CSO found.

The latest numbers mean that from the trough in 2013, prices nationally have increased by 72.1 per cent.

The figures point to an “ongoing dysfunctional property market”, according to the mortgage brokers umbrella group Brokers Ireland.

Annual price growth in Dublin, where supply pressures are most evident, was put at 11.6 per cent in the year to December. House prices in the capital increased 10.8 per cent, while the cost of apartments climbed 14.7 per cent in the same period.

Residential property prices across the State outside Dublin were 13.3 per cent higher in the year to December. The west region showed the greatest price growth (16.4 per cent), while the southeast region recorded the least price growth (11 per cent).

Overall, the national index is 22.9 per cent lower than its highest level in 2007 just before the financial collapse and property crash.

Brokers Ireland spokeswoman Rachel McGovern said supply was falling “so deeply behind demand, leaving the ‘normal’ house-buying generation, largely the squeezed middle, with the ‘Hobson’s choice’ of excessive rents or competing with better off cohorts of the population for limited housing supply, and pushing the less well off into homelessness”.

She said the reality was that “over the longer term home ownership is central to financial security, provided it’s achieved at an affordable price”.

“The supply situation is so extreme that in most areas of the country it’s cheaper to buy, if one can, than rent a property.”

She said figures show that less than 10,000 new homes were issued with a Building Energy Rating last year, with ESB connections, a highly questionable measure of new builds, almost double that at 19,271.

“Yet housing demand is estimated to be running at about 40,000 homes a year. Either way, even the most favourable interpretation leaves supply well short of demand with considerable backlog on top of yearly shortfall.”

The 12.3 per cent annual increase – the fastest since June 2015 – “underlines how strong the current momentum is in Irish property prices”, said the chief economist with KBC Bank Austin Hughes.

“We remain of the view that the Irish housing market is in the early stages of moving to more modest and, consequently, more sustainable rates of increase in the coming year. However, the December data emphasise that this may not be an entirely smooth process.”

1 ‘I don’t need to do any of this. . .I don’t actually need to work.’
2 Basic income for all: Has the Covid crisis given us a new economic model?
3 Only way is up for Stripe as valuation skyrockets
4 Promontoria barred from pursuing doctor over Ulster Bank loan
5 Direct sea routes to Europe offer certainty in choppy Brexit waters
6 Online shoppers face unwelcome tax surprise
7 Admission of mistake in Oxford vaccine dose raises doubts over reliability
8 Fiona Reddan: Who’s afraid of Revolut? Not AIB and BOI it seems
9 ‘Make plans but don’t hold on to them too seriously’
10 How long can Government afford to keep State pension age at 66?
Real news has value SUBSCRIBE