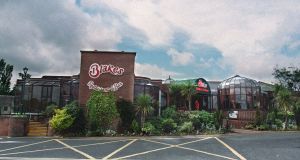 Homebuilder Cairn hopes to build 179 student accommodation units, with space for 576 beds, on the former Blakes and Esmond Motors site off Stillorgan Road

A proposed nine-storey development for up to 600 students in Stillorgan is too high, too big, will not offer any housing for local families or empty nesters, does not have enough parking, will devalue local properties and will cause more traffic congestion, according to local residents, TDs, councillors and transport authorities. One objection went so far as to call the proposed development a “monstrosity”.

Homebuilder Cairn hopes to build 179 student accommodation units, with space for 576 beds as well as a gym and communal lounge, on the former Blakes and Esmond Motors Site off the N11 Stillorgan Road, in Stillorgan Village.

Cairn acquired the site back in 2016 as part of a sale of assets in Project Clear, and the proposed development also includes 103 apartments with terraces or balconies (24 x 1 bed; 70x 2 bed; and nine x 3-bed); retail units and a community sports hall and children’s play area on the site. The proposed development will include a nine-storey block, graduating to six and seven, and then four stories, on the corner of the hill.

However, while Cairn is hoping for its planning application to be fast-tracked under the new An Bord Pleanála process, so far, more than 50 submissions have been made to the planning authority responding to the plans – the vast majority of which object to it.

In her submission, Fine Gael TD Josepha Madigan said “new development in the area is welcome”, but expressed a concern over access issues as well as the height and density of the proposed development.

Independent TD Shane Ross bemoaned the intended use of the building for students instead of residential housing, and has called on An Bord Pleanála to refuse permission.

“First and foremost we need to address the housing needs of older people and young families in the area,” he wrote.

Richard Boyd Barrett TD writes that the “overall height, mass and scale is not appropriate to the surrounding residential areas”, while Cllr Anne Colgan has concerns about the lack of appropriate parking at the development, which only has plans for 40 spaces, as this “would inevitably result in overspill parking in local residential roads, to an extent that would be unacceptable”.

Beaufield Park Residents Association argues that “no provision is made for social diversity in the development”, and that the development seeks “to harvest the high value of well-off students”. It also complains that it doesn’t offer properties which would “be attractive for elderly Stillorgan residents to trade down”.

Residents in the Linden Lea and Glenalbyn Road Residents group have objected to the plans on the grounds that it constitutes “over development”, and is more appropriate to a “ a town centre and Stillorgan is a village, not a town centre”.

Another resident wrote that “this is overdevelopment, the sheer height, scale, bulk and mass is beyond belief and comprehension”, while yet another said that far from being a signature building as set out in the local area plan, the new proposal is “a monstrosity”.

Independent councillor Deirdre Donnelly has a concern that the rooms will be vacant for large periods of time.

“It is unacceptable that rooms would be left vacant at certain times when there is a housing crisis,” she wrote.

The resident of the house closest to the proposed development, noted the good working relationship he has with Cairn Homes, but wants to see the developer take responsibility for the cost of monitoring noise and excavation work so his property, and those adjacent, aren’t unduly affected.

Dún Laoghaire Rathdown County Childcare Committee has also objected on the grounds that it does not include any proposals to offer childcare on the site, and as such, says that it does not comply with recommendations.

Other concerns raised by local residents include the potential for devaluation of property, traffic noise, adverse impact on access to sunlight and daylight and flood risk.

Cairn is not the first developer to seek permission under the new Strategic Housing Development system. This allows developers of more than 100 homes to apply for planning permission directly to An Bord Pleanála, thus bypassing local-authority decision-making processes.

Earlier this year, the planning authority blocked developer Michael Cotter’s firm Viscount Securities plans for 927 units at Clay Farm in Leopardstown, while more recently, it rejected an application by Burkeway Homes for 113 new homes at Bearna outside Galway city.

1 ‘I don’t need to do any of this. . .I don’t actually need to work.’
2 Admission of mistake in Oxford vaccine dose raises doubts over reliability
3 Direct sea routes to Europe offer certainty in choppy Brexit waters
4 Only way is up for Stripe as valuation skyrockets
5 Promontoria barred from pursuing doctor over Ulster Bank loan
6 There was no vaccine for Anglo: Why the last crisis was different
7 Anti-alcohol zeal of public health experts peppers reopening debate
8 Unilever’s Dutch and British arms merge after 90 years ahead of Brexit
9 Pandemic brings a halt to Zara-owner’s Irish expansion
10 ‘Make plans but don’t hold on to them too seriously’
Real news has value SUBSCRIBE