Economy to grow by 4.4% this year but threats loom 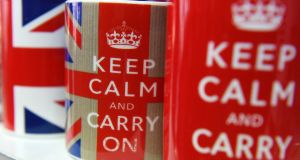 Known unknown: DBRS said Brexit is one of the main threats to Irish growth but pointed to lack of clarity over the issue. Photograph: EPA

The Republic’s economy will expand by 4.4 per cent this year, according to international ratings agency DBRS, which warns that Brexit and US tax policies are the main threats to growth.

DBRS, which rates countries and organisations on their ability to repay their debts, confirmed the Republic’s rating of A (high), indicating that the State it is a good bet for lenders and should pay minimal interest on borrowings.

The agency predicted that gross domestic product, a measure of all the wealth generated by the Republic, should grow by between 3 and 4 per cent over the next few years. It estimates that the economy grew by 7.3 per cent last year.

DBRS said that the UK’s exit from the EU is potentially negative for the Irish economy, but noted that the effect so far had been subdued. DBRS also pointed out that last December’s deal between Brussels and London appeared to rule out a hard Border with the North.

“Lack of clarity over how multinational firms operating in Ireland will respond to the change in US trade and tax policy poses a second external risk,” DBRS said.

The agency added that recent reductions on company profits in the US could cut future multinational investment in the Republic.

1 Wet pub openings fuelled big rise in Irish Covid infection rates
2 Chris Johns: Economies may enjoy ‘roaring twenties’ if ministers learn lessons
3 Basic income for all: Has the Covid crisis given us a new economic model?
4 How long can Government afford to keep State pension age at 66?
5 Admission of mistake in Oxford vaccine dose raises doubts over reliability
6 ‘I don’t need to do any of this. . .I don’t actually need to work.’
7 Direct sea routes to Europe offer certainty in choppy Brexit waters
8 Promontoria barred from pursuing doctor over Ulster Bank loan
9 Only way is up for Stripe as valuation skyrockets
10 Fiona Reddan: Who’s afraid of Revolut? Not AIB and BOI it seems
Real news has value SUBSCRIBE