Irish-Europe ports link could be funded in ‘super-hard Brexit’ 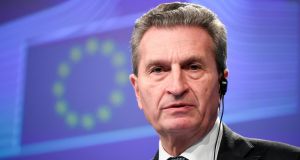 The European Union could fund new ways of connecting Irish and continental European ports if a “super-hard Brexit” cut off access to the UK, the EU budget commissioner has told the Oireachtas finance committee.

Germany’s EU commissioner Günther Oettinger said EU financial reforms meant money could be redirected to ensure the transport of products from Irish ports to Rotterdam, Antwerp and other EU ports.

He told the Oireachtas Joint Committee on Finance, Public Expenditure and Reform that the new EU budget could fund “shocks” or new facilities for Ireland in the event of “a hard Brexit”.

Mr Oettinger was in Dublin on Tuesday to discuss the commission’s forthcoming negotiations on the EU’s next seven-year budget from 2021 to 2027, known in Brussels as the “multiannual financial framework” or MFF.

The German politician is on a tour of member states to hear their representations on how to shape the future EU budget, which is usually the subject of protracted bartering, before he presents concrete proposals, hopefully in May, and has them approved by the European council and parliament by June 2019.

EU member states will have to pay more to plug the €12 billion to €14 billion annual hole left in the budget from the UK leaving the bloc in March 2019 and to maintain existing programmes, he said.

The shortfall could be met equally by savings and “fresh money”, he said.

Budget negotiators were preparing for cuts of 5-10 per cent in cohesion funding and a similar cut in subsidies to farmers under the Common Agriculture Policy that accounts for 40 per cent of the EU’s budget, he said.

Illustrating the challenges of the remaining 27 EU member states signing off on the budget, Mr Oettinger said at least 15 to 20 member states would “accuse me of not reducing CAP by a higher amount”.

The commission is under pressure from the likes of the Netherlands, Denmark and Sweden to reduce CAP payouts.

In overall terms, Mr Oettinger told the committee, member states would have to contribute between 1.1 and 1.2 per cent of gross national income to the new EU budget – up from a current level of 1 per cent – to meet the shortfall left by UK’s departure and up to 1.3 per cent to fund the cost of further EU reforms.

Mr Oettinger said EU military spending would have to increase because US president Donald Trump’s “America First” isolationism meant Europe “has to do more for its own external and internal security”.

“If Europe is not investing more, you are coming to a dangerous position,” he said, citing the increased threat from terrorists Islamists and Russia.

“It is about our own security and protecting our kiddies in the next generation,” he added.

Mr Oettinger said the commission was assessing how country contributions are calculated as a percentage of gross national income after Ireland paid an additional €280 million last year in contributions to the EU budget due to the surge in gross national product growth from multinationals booking more intellectual property in Ireland.

Asked about the possibility of an EU digital tax, which is opposed by the Irish Government, Mr Oettinger spoke out in support of this potential new source of tax revenue for the EU, saying there was “nearly nothing of fair revenues coming to Europe” from big tech companies such as Google, Amazon and Facebook.

8 Importance of making a good first impression at interviews