Brexit basket case: the British have forgotten how to deal with facts

Brexit stance: Theresa May said on Friday that the time for arguing either side of the referendum was over, in an interview with Andrew Marr on the BBC on Sunday. Video: BBC 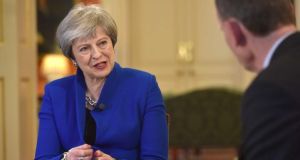 Brexit Britain: for the first time Theresa May has told her country that leaving the EU will have costs. Photograph: Jeff Overs/BBC/PA Wire

One of the useful attributes of the European Union is its ability to fudge pretty much any controversial issue. Problems that in the past often led to serious trouble – even conflict – are dealt with in a way that involves subtle contradictions and a blurring of sharp edges.

Peter Mandelson, the former European commissioner and Northern Ireland secretary, describes the EU’s wonderful ability to solve tricky situations in terms of “duality”. Each side often gets what it wants and is happy with deals that are eventually struck, even though this is, strictly, logically impossible. It doesn’t always work that way, of course. Sometimes reality just bites too hard.

The UK government has clearly been in the EU for too long: the British have gone native and embrace fudge at every opportunity. Even Brussels knows that hard decisions are sometimes unavoidable. The UK seems to have forgotten how to deal with facts and cold logic.

Theresa May promises as frictionless a border as possible. That would be the one we currently have, but it is not a good description of the one we are likely to get

The North and the Belfast Agreement are a case in point. Mandelson describes the duality of Northern Ireland in terms of both its political separateness and its membership of an all-Ireland economy. Depending on where your prejudices lie, you can claim to be separate to or part of Ireland. Nobody should underestimate how British and Irish membership of the EU, with its customs union and single market, allowed this fudge to be constructed. As Mandelson said this week, it was membership of the EU that anchored the duality.

The invisible Border is perhaps the biggest economic feature of the Belfast Agreement, but it was the UK and Ireland’s membership of the EU that was all-important. And the simple fact is that is all going to change.

Restoring a hard border will do economic harm. There is little chance, as things stand, of the existing, invisible Border being maintained. Theresa May, the British prime minister, promises as frictionless a border as possible. That would be the one we currently have, but it is not a good description of the one we are likely to get.

Mandelson is not the the first to suggest that if only a few people in the North shifted towards prioritising economics over politics, a vote for reunification could be the result of the restoration of the hard border. The economic damage that will result from the DUP’s hard-line Brexit stance could do lots for republicanism.

We’ve now had the much-hyped four ministerial Brexit speeches. Also, in recent days, three anti-Brexit interventions by former prime ministers. And, of course, Jeremy Corbyn’s embrace of the indefinite article: he now favours a customs union. Some people, including the former PM John Major, got too excited about this, claiming that customs-union membership will solve the Border problem. That’s the the thing with details: you have to pay attention to them. Membership of the customs union on its own does not make the Border issue go away.

Major’s intervention was, in fact, thoughtful and full of common sense. And was instantly and predictably denounced as a betrayal by the usual suspects. Major himself was, incredibly, branded a traitor. Such is the level of Brexit debate.

Boris Johnson’s set-piece speech was instantly forgettable: the usual bluster and waffle. As was Liam Fox’s. Johnson’s more noticeable contribution to the debate came later, with remarks to the media and a leaked letter to the prime minister revealing a belief that restoration of a hard border will not be a big deal. Other leading Brexiteers clearly think the same way.

The British PM asked Brussels if the UK could stay in the bits of the single market that she likes and exit the bits she does not. Good luck with that

Theresa May’s speech was the big one. The belated recognition of some sense of reality is to be welcomed. For the first time she told the British people that there will be costs. (Telling the truth but not the whole truth is still a form of lying.) And she asked Brussels if the UK could stay in the bits of the single market that she likes and exit the bits she does not. Good luck with that.

This remains a mess because May has accommodated rather than confronted the Brexit extremists in her party. And those Brexiteers have become quite open about both the hard border and the Belfast Agreement. They care little about the former’s being restored and the latter’s being dismantled.

May’s original idea was for three baskets. One basket – or bit of the economy – would wholly align with the European Union. The second would align but in a British rather than European way. The third would diverge. She announced in the most recent speech a fourth basket, one labelled “creative solutions”. This is where financial services will sit. As Ian Dunt, perhaps Britain’s best Brexit commentator, remarked, this is the one where Theresa May is asking Brussels for help. And that’s not as daft an idea as it sounds. But it’s all rather late, and requires goodwill and a belief that the EU will agree, eventually, to the UK’s being both in and out of the single market.

The United Kingdom is heading for a Canada-type free-trade deal, with maybe a few bells and whistles stuck on. The EU basis of the duality of Northern Ireland is destined to end. That logically necessitates a restoration of a hard border. Some tough choices lie ahead for Leo Varadkar.