Ireland has fourth most efficient business tax system in the world, says PwC 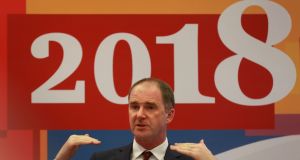 A global study of corporate tax systems has found that the Republic has the most efficient system for paying business taxes in the European Union and the fourth most efficient worldwide.

The Paying Taxes 2019 study, compiled by PwC, found that the Irish system was the best in Europe when measured in terms of the amount of hours it takes for a company to comply, the number of filings required, and the aggregate rate of taxes levied on businesses.

The report examined the total level of taxes levied on businesses, including corporate profit and employment taxes, and compared them in countries across the globe. It found that in Ireland, companies pay an average of about 26 per cent of their profits on various taxes, including an average 12.4 per cent in corporation profits, 12.2 per cent on labour, and 1.4 per cent in other business levies.

The Irish total compared favourably, from the business sector’s perspective, with the global average of 40.3 per cent, the European average of 39.3 per cent, and the totals in individual countries such as the UK (30 per cent), France (60.5 per cent) and Australia (47.4 per cent).

While most of the commentary on the Irish business tax system focuses on the relative competitiveness of the headline corporation tax rate of 12.5 per cent, Ireland is also “substantially more competitive” than other states when it comes to employment taxes paid by companies to national exchequers.

In Ireland, the report found, it takes an average of 82 hours of administration for a company to comply with its responsibilities and file returns, which is substantially lower than the time required in, for example, France (139 hours) and Germany (218 hours).

It takes an average of nine separate filings in the Republic for a company to meet its obligations, against the EU average of 12 and a global average of 24 filings.

The only states with more efficient business tax systems than Ireland were top ranked Hong Kong, and the duo in joint second, Qatar and the United Arab Emirates, where tax levels are low across the board.

Joe Tynan, the head of tax at PwC Ireland, said that although Ireland performed well in the rankings and has an efficient tax system that helps attract foreign direct investment, “some improvements could still be made”.

He said there was a sense in the industry that the Revenue Commissioner’s ability to handle “follow-up queries” from businesses after they have filed has deteriorated.

“The online filing experience is pretty good and works well. [BUT]most challenging of late has been the administration of that – Revenue has been less helpful with follow-up queries than it used to be,” he said. “This particular issue would not have been captured by the Paying Taxes report.”

Mr Tynan said the Irish tax system remains almost uniquely exposed to possible supranational tax initiative such as a European common consolidated corporate tax base (CCTB), which would likely favour the economies of larger industrialised nations such as France or Germany if it were ever introduced. Successive Irish governments have strongly opposed a CCTB across Europe.