It’s time to prepare for the fourth industrial revolution – and, oh yes, Christmas 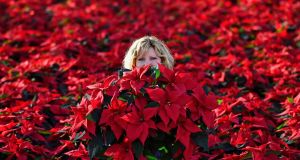 Image of the week: Carolyn Spray surrounded by her many, many poinsettias at the Pentland Plants garden centre in Scotland. Photograph: Jeff J Mitchell/Getty Images 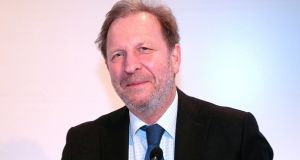 In numbers: Yacht or not?
£100m
Reported value of the Lionheart, a yacht owned by retail billionaire Philip Green. It has been suggested that the yacht could be seized to help plug part of a black hole in BHS pension scheme.

£700m
Estimated size of the deficit in the BHS scheme. It was “only” £571 million at the time of the department store chain’s April collapse, which was blamed on previous owner Green. And it has only worsened after a post-Brexit slump in sterling and gilt movements.

20,000
Number of BHS pensioners who face cuts to their retirement income if the pension hole is not filled. Green and wife Tina, meanwhile, took delivery of the new yacht in Malta just this summer.

Image of the week: Red mist
Either this is the Christmas-themed sequel to Day of the Triffids, or Carolyn Spray, director of Pentland Plants in Loanhead, Scotland, has the nicest job in the world. She oversees the growing of some 100,000 poinsettias each year. Not only that, but the guy from Getty drops in every November to take her picture. In Ireland, hundreds of thousands of poinsettias will be shifted this season, the festive house plant now something of a horticultural success story thanks to cheap and cheerful supermarket displays.

Hint: They make an excellent gift.

British Labour leader Jeremy Corbyn has had some thoughts on it this week: “We now face the task of creating a New Britain from the fourth industrial revolution – powered by the internet of things and big data to develop cyber physical systems and smart factories.” Well, good luck with that, Jeremy.

To recap: The first industrial revolution involved steam power to mechanise production. The second harnessed electric power to create mass production. The third saw electronics and information technology automating production. The fourth is a lot like the third, only everybody earns less money.

Getting to know: Christian Labeyrie
Christian Labeyrie is the chief financial officer of French construction group Vinci, and he definitely has not been sacked. Nor is Vinci restating its company accounts for 2015 and 2016 as a result of his, or anyone else’s, accounting errors. There were no errors.

Still, as if stock markets weren’t volatile enough, these claims featured in a hoax press release published by Bloomberg on Tuesday afternoon – and they were enough to temporarily wipe 18 per cent off Vinci’s share price. Luckily, it had almost fully recovered by the end of the day, thanks to a terse statement in which Vinci denied all information “contained in this fake press release” and said it would be “investigating all legal actions in furtherance thereof”.

The list: Shrinkflation
Were it not owned by confectionery giant Mondelez, you could almost feel sorry for Toblerone – its distinctive shape meant it couldn’t get away with the “shrinkflation” tactics known and loved by the industry since forever.

Here are five other chocolate brands disappearing before our eyes.

1. Maltesers: The galling thing about this one is that it’s the “sharing” bags that are getting smaller. New slogan: The lighter way not to enjoy chocolate.
2. Creme Eggs: Why sell half a dozen creme eggs when you can flog five?
3. Quality Street: In fairness to Nestlé, the Street used to be the poor relation to Roses, and that is categorically no longer the case.
4. Yorkie: It’s not for adults.
5. Terry’s Chocolate Orange: The segments have been “hollowed out” and even the pictures are distressing. Terry can keep them now.

1 Ireland stands to benefit in a big way from investing in public transport
2 Ryanair expects air fares to fall when flights take off again
3 Michael Smurfit: ‘I asked Trump to invite me to the White House for my 80th birthday’
4 ‘I’m so lucky to be in the Caribbean – a million miles from Derry Girls’
5 ‘The recovery needs to be a full-scale economic renewal’
6 Charlie Chawke plans 290 apartments and hotel on Goat pub site
7 Small businesses are cannon fodder in zealous anti-virus experiment
8 Tax and the Pandemic Unemployment Payment: Your questions answered
9 Household savings soar as consumers stop spending
10 Minister calls on EU to act against tobacco firms ‘undermining’ menthol ban in Ireland
Real news has value SUBSCRIBE