Central Bank will intervene if house prices begin to soar 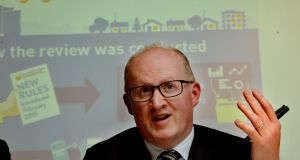 Central Bank governor Philip Lane has indicated the regulator will intervene in the event of runaway house price inflation that might arise from tweaks to its mortgage lending rules and the planned tax rebate scheme for first-time buyers.

“If we see that there’s a perverse, unwelcome interaction between excessively rapid lending and excessively rapid increases in house prices, then we can intervene,” he said at the unveiling of “limited” changes to its macroprudential rules.

The Central Bank announced a number of small changes to its rules, which were introduced in February 2015.

Second-time and subsequent buyers will continue to need a 20 per cent deposit for their applications. However, the Central Bank has increased the percentage of each lender’s loans that can be exempt from this limit from 15 per cent to 20 per cent.

This gives the banks greater headroom to offer loans to subsequent buyers outside the regulator’s limits.

The Central Bank has left the loan-to-income ratio unchanged at 3.5 times, ignoring calls from the construction industry to raise it to 4.5 times to bring the Republic into line with the UK.

Mr Lane said this was a “prudent and reasonable” decision given that Ireland was a more open economy, and more prone to recession and income shocks.

The changes will be implemented in January and follow a review which yielded 50 submissions from various parties.

There was broad welcome for the changes. Minister for Finance Michael Noonan said the updated rules should make it “easier” for house buyers to secure a home loan that suited their needs.

He said the changes, together with the Government’s help-to-buy scheme, would be of “great assistance” to first-time purchasers in securing a newly built home.

Fianna Fáil’s Michael McGrath said the new deposit rule for first-time buyers was “fair and reasonable” but cautioned that “house price movements are now going to have to be very closely monitored”.

Marian Finnegan, chief economist with Sherry FitzGerald, the country’s biggest estate agent, said the new rules were “more in line with international practice and it should help underpin an increase in construction activity”.

Cork-based property developer Michael O’Flynn welcomed the changes but was disappointed that the loan-to-income limit was not raised.

“I welcome the initiative on loan-to-value,” he said. “It’s one of the issues that needed to be tackled and full credit to the Central Bank for doing so. However, the loan-to-income measure is also a critical issue for buyers. I was hoping they might have gone to four times’ income because you also need to make it possible for people to borrow that extra bit of money.”