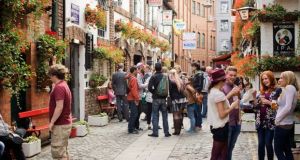 A £500 million (€588 million) regeneration project that could transform a 12-acre site in the heart of Belfast has been granted planning permission by city officials despite major objections from campaigners.

London-headquartered Castlebrooke Investments wants to redevelop an area bordering the Cathedral Quarter and create a “new urban space that blends Belfast’s history with state of the art design”.

Castlebrooke Investments has said it intends to develop office, retail, hotel and residential projects on the 12-acre site which they have named Tribeca Belfast – a name which many Belfast city councillors had initially opposed.

The site itself has been the subject of a number of proposed – but never realised – projects for nearly two decades.

Castlebrooke Investments bought the site from Cerberus, which had acquired it in 2016 as part of a portfolio of former non-performing Ulster Bank loans.

The London group claims its development project will “yield substantial economic benefits including the estimated creation of 1,600 new jobs on completion” for Belfast.

Neil Young, chief executive of Castlebrooke Investments, said:“This is the start of a major regeneration for a vital part of Belfast city centre and we are delighted that approval has been granted. It sends a clear message to other investors that the city is open for business.”

The developer has also estimated that Tribeca Belfast will create about 60,000sq m of “additional employment floorspace” in Belfast city centre and up to 600 construction jobs each year during the construction phase.

But a campaign group set up by people who live and work in the area which will be redeveloped has warned that the project will “inflate rent prices and push more people out of the city”.

The Save Cathedral Quarter (Save CQ) group said an “authentic, organic and richly diverse cultural working population now is under threat”.

“With the proposed new development’s focus almost totally on commercial redevelopment, with huge shopping complexes replacing demolished built heritage, it will not only displace the previous creative identity of the area, but the ensuing wave of upward rent reviews will “price out” the arts, Save CQ has warned.

It has also noted that the site “contains six listed buildings and lies across two conservation areas”.

“It is a particularly sensitive area, performing a valuable and unique role for the city in creating a distinct identity, character, and sense of place for the city.

“The Cathedral Quarter offers something equally unique and memorable to the people that come to visit Belfast, and the collective value of its heritage needs to be protected to this end,” Save CQ said.