On a monthly basis, consumer prices rose by 0.2 per cent in December, new figures show 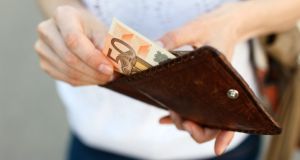 The annual average rate of inflation last year rose to 0.9 per cent from 0.5 per cent in 2018 due primarily to increases in costs for housing, utilities, restaurants and hotels.

New figures from the Central Statistics Office (CSO) show the cost of housing and utilities climbed 3.8 per cent in 2019, the largest increase in all the categories measured.

This was partly due to a rise in mortgage interest repayments, which rose on average by 2.8 per cent last year compared to a drop of 0.2 per cent in 2018.

Last year, the cost of eating out or staying in a hotel jumped 3 per cent while the prices paid for alcohol and tobacco rose 2.8 per cent.

Over the same period there was a 5.3 per cent decrease in communications costs, while the cost of household equipment was down 3.2 per cent, and clothing and footwear by 1.5 per cent.

According to the latest data, consumer prices rose 1.3 per cent in the year to December on the back of increases in education and housing and utilities. This was the largest year-on-year price increase since recorded in April when prices rose by 1.7 per cent compared to the same month a year earlier.

There was an 8.8 per cent fall in communication costs in December 2019 versus the same month in 2018. However, education costs rose 4.1 per cent, while housing, water, electricity, gas and other fuels, climbed 3.3 per cent. In addition, there were increases in the cost of alcohol and tobacco (up 3.1 per cent) and in restaurants and hotels (up 2.6 per cent).

On a monthly basis, consumer prices rose by 0.2 per cent in December due primarily to a 2.5 per cent increase in transport costs.

Prices on average, as measured by the EU Harmonised Index of Consumer Prices (HICP), increased by 1.1 per cent last month compared with December 2018.

Over the last four years, the cost of housing and utilities has jumped by 10.8 per cent while prices for restaurants and hotels are up 9.8 per cent. The cost of education has also risen sharply, up 9.2 per cent since 2015.

During the same period, furnishings and household equipment costs fell by 13.9 per cent.

The overall increase in the consumer price index since 2015 was 1.8 per cent, according to CSO.