‘Huge feeling of uncertainty’ in North over Brexit deal 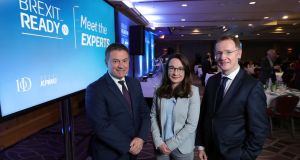 There is a “huge feeling of uncertainty” over the current Brexit deal among the Northern Ireland businesses community, a senior industry figure has warned.

It fears Boris Johnson’s deal, which has removed the backstop, has left many questions unanswered.

Gordon Milligan, chairman of the Institute of Directors (IoD) in Northern Ireland and chief executive of Translink, the North’s key public transport provider, said the business community wants to understand the detail of the proposed deal.

Speaking at an IoD “Brexit Ready NI” event in Belfast on Friday he said: “The government’s own impact assessment outlines the increasing burden of red tape and bureaucracy that could be placed on local businesses, especially around new customs requirements. That is deeply concerning.

“And it remains unclear whether Northern Ireland will benefit from any future EU or UK trade agreements.”

In the House of Commons on Thursday Stephen Barclay, the UK secretary of state for exiting the European Union, had stressed that the British prime minister’s Brexit deal “explicitly allows the United Kingdom to ensure unfettered market access for goods moving from Northern Ireland to Great Britain”.

But he also stated: “There will be minimal targeted interventions designed to prevent, for example, trade in endangered species.”

The lack of detail so far from the British government on what exactly these “targeted interventions” might entail for businesses has added to existing anxieties in the North about what the post Brexit trading landscape could look like.

The IoD NI is the second leading business group this week to draw attention to increasing concerns among firms in Northern Ireland about the British government’s latest Brexit deal.

Speaking in Belfast on Thursday, John Allan, who is president of the Confederation of British Industry and chairman of Tesco and Barratt Developments, said businesses in the North want to protect their position in the UK’s internal market and across the island of Ireland in order to “invest, grow and contribute to their local communities”.

“Businesses will welcome steps towards a deal that guarantees the rights of 4 million citizens living abroad in the UK and EU and opens a pathway to a new UK-EU partnership.

“But for them it’s not as simple as ‘getting Brexit done’. Here in Northern Ireland, we need urgent clarity from the UK government about how they intend to protect Northern Ireland’s place in the internal market. Because Northern Ireland businesses simply cannot afford for the next phase of Brexit to drain investment and growth at the level we’ve seen over the past three years.”