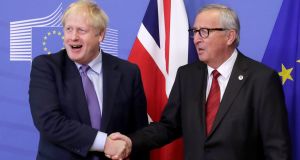 The proposed Brexit deal could result in a major increase in cross-Border smuggling and technology will be powerless to prevent it from happening, a senior customs expert here has warned.

Michael Doherty, a customs and border consultant and a former Irish Customs officer, said any divergence in trade costs or regulations created a big incentive for smuggling.

“And I can categorically say that there is no technology currently in operation, nor do I see in the near future, capable of preventing smuggling without an infrastructure,” he told a conference on the economic implications of Brexit for the island of Ireland, jointly hosted by the Central Bank of Ireland and PwC.

“You can point to arrangements in other countries like Switzerland or Sweden where they have various simplified procedures but they all have border infrastructures,” Mr Doherty said.

He was speaking as the UK government reached an agreement with the EU on a new Brexit deal , which would effectively create a customs border down the Irish Sea to avoid a land border on the island.

Martina Lawless of the ESRI think-tank said: “If you’ve got beef coming into Northern Ireland paying zero per cent tariff and an 80 per cent tariff regime in the Republic there will be people who want to take advantage of that gap.”

Also speaking at the event was the head of Northern Ireland’s main business lobby, the Confederation of British Industry’s Angela McGowan, who compared the choice between staying in the EU and leaving to the difference between “a three-course meal and a packet of crisps”.

She said Brexit could drive the North’s economy “off a cliff” and businesses there were tired of hearing politicians talk about the potential trade deals the UK would do after Brexit.

“It’s difficult for businesses [in the North] to hear politicians on the radio saying the international deals will offset what we had with Europe, ” she said.

“Certaintly our approach in the CBI and from our members is, well you’re getting a choice here between a three-course meal and a packet of crisps.”

Ms McGowan cited figures from Scotland’s Fraser of Allander Institute, suggesting that prime minister Boris Johhson’s divorce deal would reduce UK output by 6.4 per cent over the next 10 years as opposed to a reduction of 5 per cent under his predecessor Theresa May’s deal.

She said the hit for Northern Ireland would be worse as the economy there was deeply integrated with the Republic’s, particularly in the areas of agriculture and energy, and therefore more exposed to Brexit than any other part of the UK.

Several speakers highlighted the problematic nature of the UK government’s proposed customs arrangements for the North, which would leave Northern Ireland businesses having to claim back tariff differentials depending on whether the traded goods were sold in the UK or exported south of the Border to the Republic.

The Central Bank’s Thomas Conefrey said there had already been a noticeable slowdown in UK growth since the Brexit referendum with studies showing the economy is probably 3 per cent off where it would have been.

While the consumption had held up, he said this was at the expense of people eating into their savings, which would have a negative impact down the line in terms of the resilience of households to withstand shocks.

While the Irish economy has grown strongly in recent years, it would have been stronger without the UK slowdown, he said. This could seen across several sectors from tourism numbers to exports of machinery.

Tubridy could have been ‘more careful in choice of words’ in interview – BAI 14:47
Salesforce to buy Slack in deal worth $27.7bn 14:08
Rohan Holdings to pay €7m for former BMW dealership in south Dublin 13:38
Marist Fathers secure €20m from sale of south Dublin lands 13:38
Von der Leyen lays out plans for ‘rewriting rulebook’ for Europe’s digital market 13:22