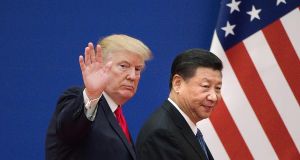 US president Donald Trump and China’s president Xi Jinping. The IMF said the self-inflicted wounds of the US and China’s trade war had created a ‘precarious’ economic situation. Photograph: Nicolas Asfouri/AFP via Getty Images

Global growth is set to fall this year to its slowest rate since the financial crisis, the IMF said on Tuesday, as it warned that the self-inflicted wounds of the US and China’s trade war had created a “precarious” economic situation.

On Brexit, the Washington-based fund forecast the UK would suffer a moderate recession next year in the event of a no-deal outcome while warning the government’s generous spending plans would derail its strategy of balancing the books by the middle of the next decade.

UK finance minister Sajid Javid is expected to announce big spending hikes to offset the cost of Brexit in his first budget next month.

In its report, the IMF said tit-for-tat tariffs between the US and China have chilled business confidence and investment, leaving global trade in goods almost stagnant and forcing central banks to cut interest rates to shore up growth.

There is an urgent need to cease hostilities and restore confidence to the global outlook, the IMF said in its twice-yearly World Economic Outlook, in pointed comments directed at US President Donald Trump’s administration.

The IMF pleaded for countries to put all their efforts into repairing the global economic fractures, in a bid to stoke confidence, although it was not optimistic about the chances of success.

“Though the recent easing of monetary policy in many countries could lift demand more than projected, especially if trade tensions between the United States and China ease and a no-deal Brexit is averted, downside risks seem to dominate the outlook,” the World Economic Outlook said.

Gita Gopinath, the fund’s chief economist, said: “With central banks having to spend limited ammunition to offset policy mistakes, they may have little left when the economy is in a tougher spot.

“As policy priorities go, undoing the trade barriers put in place with durable agreements and reining in geopolitical tensions top the list,” she added. “Such actions can significantly boost confidence, rejuvenate investment, halt the slide in trade and manufacturing and raise world growth.”

The world economy will grow only 3 per cent in 2019, the IMF estimated, down from 3.8 per cent as recently as 2017 and 0.3 percentage points below its equivalent forecast six months ago. This is the slowest rate of expansion since the global recession of 2009.

On the UK, the IMF said the extra public spending envisaged by the government should mitigate the cost of Brexit for the economy, but would hamstrung efforts to bring down the debt ratio and insulate the country against future shocks.

“In case of a disorderly Brexit accompanied by a sharp rise in barriers to goods and services trade with the European Union, the policy response will need to take into account the extent of the adverse financial market reaction and its likely impact on macroeconomic stability,” it said.

The IMF predicted that the global economy would improve next year, growing at a rate of 3.4 per cent, but this forecast is entirely dependent on recoveries in highly-stressed economies such as Turkey, Argentina and Iran and improvements in global weak spots such as Mexico, Brazil and Russia.

The global “big four” economies of China, the US, the euro zone and Japan will see no improvement in their growth rates over the next five years, it predicted.

In the US, the fund expects a further slowdown from 2.4 per cent this year to 2.1 per cent in the election year of 2020 – well below Mr Trump’s promise to maintain expansion above 3 per cent a year.

Given the weakness of the German economy, which is suffering from deep stress in its automotive sector, the euro zone is expected to expand only 1.2 per cent this year, rising slightly to 1.4 per cent in 2020.

Downgrades were widespread even in countries far removed from the US-China trade war. In sub-Saharan Africa, for example, more than half of the countries are expected this year to post per capita growth below the median levels of the past 25 years.

The report said the forecast downgrades “largely reflect the fact that tariffs have risen and are costing the global economy”. Most of the downturn has come in manufacturing and global trade, while services and consumer confidence have held up reasonably well.

The IMF cautioned that it was more likely than not to downgrade the forecasts again in future.

“The divergence between manufacturing and services has persisted for an atypically long duration, which raises concerns of whether and when weakness in manufacturing may spill over into the services sector,” it said.

Central banks should maintain their loose policy, the fund recommended, as it gave strong backing to recent interest rate cuts by the Federal Reserve and the European Central Bank.

With growth at its weakest level since 2008-09, Ms Gopinath said that monetary policy could not continue to be the “only game in town”, and it “should be coupled with fiscal support where fiscal space is available and where policy is not already too expansionary”.

The IMF piled pressure on to Germany in particular to do more to sustain demand, given its low public debt, budget surpluses and weak infrastructure.

Ms Gopinath said: “A country like Germany should take advantage of negative borrowing rates to invest in social and infrastructure capital, even from a pure cost-benefit perspective.” – Copyright The Financial Times Limited 2019