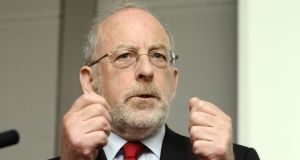 Former Central Bank governor Patrick Honohan: ‘It would be a very big mistake to use the previous crisis as a model for how the public finances should be managed.’ File photograph: Dave Meehan

Former Central Bank governor Patrick Honohan has warned the Government not to turn off the spending tap too early and risk worsening the downturn.

He said there was a danger that governments here and elsewhere will attempt to limit expenditure once the immediate health crisis from coronavirus abates.

As previous economic crises have shown, this tends to exacerbate the slump, Prof Honohan told an event organised by the Royal Irish Academy.

“There should be no loss of nerve in fully deploying the financial resources of the State and its borrowing capacity,” he said.

After the financial crisis of 2008, the then Irish government was forced into a major austerity drive, which is now blamed for deepening the subsequent recession.

“It would be a very big mistake to use the previous crisis as a model for how the public finances should be managed,” he said.

Even with a relatively swift bounce back in activity, there will be a lasting employment impact from the current crisis, Prof Honohan warned.

This could be linked to the loss of productivity in certain sectors such as hospitality, global supply chain difficulties and/or a decrease in demand from wary consumers, he said.

As a result, there has to be “heavy public spending” and in two distinct phases, “a defensive period, and a recovery and repositioning period”.

“There is a danger that when the health conditions have been restored” governments will attempt to limit the damage to the public purse, he said, particularly in the face of mounting debt levels.

The Government is expected to run a deficit of €23-€30 billion this year, driven in the main by increased spending on health and income supports. At the start of the year it had been forecasting a budget surplus.

The biggest call on the exchequer has been the Government’s two income support schemes, the Pandemic Unemployment Payment and the Temporary Wage Subsidy Scheme.

Prof Honohan said the State was in a strong position to borrow heavily as interest rates were likely to remain low for several years. “Investors know the Irish Government can afford to service that debt at these low rates,” he said. “And if it’s just a once-off increase and not a trend increase, they will not start charging a risk premium.

“Ireland can afford the fiscal means necessary to reposition the economy but the task will require care and skill,” Prof Honohan said.

The European Commission warned this week that coronavirus will hit Europe with a deeper recession than anticipated, with Ireland’s economy set to shrink 8.5 per cent this year.