Widely expected that result will be appealed 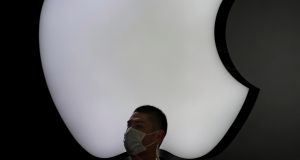 The European Commission decided in August 2016 that Apple owed Ireland €13 billion of back taxes, with interest bringing the total to about €14.3 billion. Photograph: EPA

The EU General Court will deliver its verdict next Wednesday on the Republic’s €13 billion Apple state aid case.

A spokesman for the Department of Finance confirmed that the Government has been formally notified by the second highest EU court that its judgment will be delivered on July 15th.

“There has been significant work in making the State’s case both orally and in written format before the General Court,” he said. “We cannot prejudge the decision of the General Court and are now awaiting their judgement.”

The European Commission decided in August 2016 that Apple owed Ireland €13 billion of back taxes, with interest bringing the total to about €14.3 billion. The Government and Apple subsequently appealed that decision, with oral hearings heard in the General Court in Luxembourg last September.

The commission’s case is mainly two-fold and centres on two tax opinions – or “rulings” as they are referred to – handed out by Revenue, in 1991 and 2007, the year the first iPhone was unveiled and Apple’s profits started to balloon. The rulings gave the US technology giant an unfair and select advantage over other corporate taxpayers, it says.

The primary argument is that the rulings allowed Apple to channel most of its European sales through employee-less “head office” parts of its ASI and AOE units in Cork, which were non-resident for tax purposes. Only the activities of Irish “branches” within the same units were subject to tax in the State.

ASI, by far the more profitable of the two units, is responsible for the sales and distribution of iPhones and other products outside of the US, and AOE is a manufacturing and assembly operation. The ruling was based on the premise that the valuable intellectual property (IP) behind Apple products lay outside the Irish branches and was controlled in group headquarters, in Cupertino, California.

The second strand to the commission’s case is that even if it was possible to distinguish between the Irish branches and the head offices within ASI and AOE – and that the Irish branches did not hold the IP – Revenue did not apply a proper arm’s-length principle of transfer pricing when it came to working out what profits could be taxed in the Republic.

The Government’s legal team claimed at the hearings that the commission’s case was “fundamentally flawed”, “confused and inconsistent” and had evolved dramatically over time.

It is widely expected that the outcome will ultimately end up under appeal before the Court of Justice of the European Union, the EU’s highest court.

The €14.3 billion was collected from Apple by the Government in 2018 and put into an escrow account pending the final outcome of litigation.