OECD says 170,000 jobs could be lost if there is a second Covid wave

Survey forecasts worst-case hit to employment this year of 8.2% 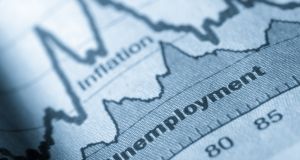 Based on a labour force survey from the CSO, the worst-case scenario could reduce the number of people employed this year by 169,770

The number of people employed in the State could fall by as much as 8.2 per cent this year if a second Covid-19 outbreak takes place in October or November, according to a forecast from the Organisation for Economic Co-operation and Development (OECD).

Based on a labour force survey from the Central Statistics Office, the worst case scenario could reduce the number of people employed by 169,770.

The Paris-based think tank has forecast the possible hit to employment based on two scenarios.

The “double-hit” scenario factors in a possible second wave, and suggests employment would contract by 8.2 per cent this year and by a further 1.7 per cent next year. This scenario assumes that further outbreaks will be avoided in 2021 due to pharmaceutical breakthroughs, “but these remain significant downside risks”.

In the less severe single-hit scenario employment would contract 6.7 per cent this year before rebounding by 2 per cent next year. Under this scenario the effective reproduction rate of the virus is assumed to stay persistently below one.

It is worth noting that under neither scenario would the Republic return to the employment growth figure seen last year of 2.9 per cent.

Again, that remains some way off the 5.5 per cent economic growth recorded in 2019.

With regard to employment growth, the Republic is forecast to fare worse than the average among both OECD members and euro zone states.

The worst possible hit to employment growth in the euro zone is 3.2 per cent and among OECD countries 5 per cent. The picture is better where GDP growth is concerned, with the Republic outperforming both the OECD and the euro zone.

“The most serious pandemic in a century has triggered one of the worst economic crises since the Great Depression,” the OECD said in its annual employment outlook. “Despite a massive shift towards telework in all countries, the number of those effectively working collapsed as companies have frozen hiring and put part of their workforce on hold through subsidised job-retention schemes.

“Available evidence also suggests that vulnerable groups – the low skilled, youth and migrants – as well as women are paying the heaviest toll of the crisis.”

Under the best-case scenario unemployment will rise by 5.9 percentage points this year.