NTMA to raise up to €1.5bn before stimulus plan

The agency has raised €18.5bn so far this year in long-term bond markets 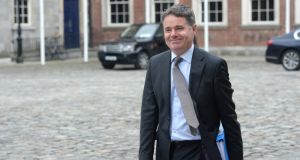 Minister for Finance Paschal Donohoe says the Government is on track to run a budget deficit of between €23bn and €30bn this year. Photograph: Dara Mac Donaill

The National Treasury Management Agency (NTMA) plans to raise up to €1.5 billion this week as it seeks to bolster the Government’s firepower ahead of the unveiling this month of a stimulus plan to tackle the Covid-19 crisis.

The NTMA has raised €18.5 billion so far this year in the long-term bond markets, having set a target in May of seeking between €20 billion and €24 billion from international capital markets to help deal with soaring cost of the health system and economic costs resulting from the pandemic. It had originally only planned to raise €10 billion to €14 billion this year.

The new Government is currently working on what Taoiseach Micheál Martin has called a “sizeable” stimulus package aimed at boosting domestic demand and employment as the economy has been thrown into turmoil in recent months.

The Republic’s unemployment rate stood at 22.5 per cent in June, albeit down from 26.1 per cent in May, as the economy continued to open up following Covid-19 restrictions, according to the Central Statistics Office.